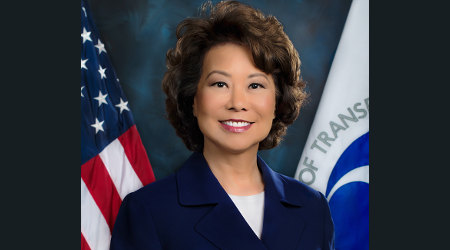 Chao's statement appears to be the latest indication that the Trump administration is backing away from a 50-50 funding commitment that New Jersey and New York officials believed they had with the U.S. Department of Transportation for the proposed $12.7 billion project.

Known as Amtrak's Gateway program, the proposed tunnel project would replace aging rail tunnels under the Hudson River that Amtrak and commuter trains use to operate between the two states. Gateway also includes replacing the decaying North Portal Bridge, of which New Jersey Transit is the largest user.

Amtrak, New York and New Jersey committed to fund half the project's cost with the belief that the federal government would pick up the other half under a 2015 deal made between the states' officials and the USDOT under the Obama administration.

But during a hearing yesterday on President Donald Trump's infrastructure plan, Chao said that the states shouldn't use federal loans to count toward their financial commitment toward the project's cost, according to a Bloomberg report.

U.S. Sen. Kristen Gillibrand (D-N.Y.) asked Chao why the loans shouldn't count toward the states' share of the cost when the states will repay the loans.

"We're not anxious for a fight on this, but for New York and New Jersey to consider funds, debt that we have given them, as part of their equity back to us is something that we disagree with," Chao said, according to Bloomberg.

When not including the loans, federal calculations determine that the states are putting up just 5 percent, she said.

Chao's statement reiterated a point made in a Federal Transit Administration (FTA) letter sent earlier this week to U.S. Rep. Donald Payne Jr. (D-N.J.). Payne is among New Jersey and New York congressional representatives who believe the states and USDOT had an agreement to a 50-50 split the cost of the project.

"For any project to be considered for funding through the [federal Capital Investment Grants (CIG)] program, project sponsors must demonstrate that the projects are supported by local financial commitment including evidence of stable and dependable financing sources to construct, maintain and operate the project as well as the overall public transportation system," FTA Deputy Administrator K. Jane Williams wrote.

The recent financial plan update for the Hudson tunnel project indicates that the states' funds are committed, but that state funding "is entirely dependent" on federal grants and loans, she said.

"It's unprecedented for a CIG project sponsor to expect the full funding and financing of a project as well as the risk associated with that project to be borne by the federal government," her letter stated.

"Finally, the project sponsors continue to reference a 50-50 agreement for a split of the total project cost between state and local governments and the federal government. The FTA and [USDOT] have no evidence of a binding agreement, however, and cannot commit any federal funds without an understanding and acceptable documentation of all project costs."

In a statement released by his office, Payne said the letter is "additional evidence" the Trump administration is backing away from a federal commitment to fund half the Gateway project's cost.

"In Amtrak's half-century existence, the federal government has never adequately funded it so that Amtrak can maintain its assets," Payne said. "While it is undeniable that NJ Transit is the largest user of the decaying Portal Bridge and Hudson Tunnels, it is also undeniable that the bridge, tunnels and rails are Amtrak assets. This administration has repeatedly trumpeted infrastructure as a national priority, but it continues to neglect and understate the importance of Gateway as the nation's No. 1 infrastructure project."

Payne added that he hoped to work with "all the project's stakeholders to hash out our differences and bring Gateway to fruition."