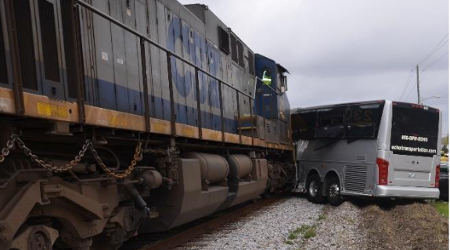 The National Transportation Safety Board (NTSB) yesterday issued a preliminary report of a deadly March 7 accident between a motorcoach stopped on a grade crossing and a CSX train in Biloxi, Miss.

The accident occurred when the Echo Transportation-operated motorcoach became lodged on the tracks and was struck by the train. Four passengers died, 39 sustained serious to minor injuries and six were uninjured. The motorcoach driver was seriously injured, while the train engineer was uninjured, according to the NTSB report.

Preliminary results from the motorcoach drivers' toxicology test was negative for alcohol and other drugs. The train crew was not tested, nor were they required to be tested.

As the motorcoach tried to move over the crossing, it became lodged on the tracks. The driver was unable to move the vehicle. He opened the door and told passengers to evacuate.

At the same time, a CSX train — composed of three locomotives, 27 loaded cars and 25 empty cars — was approaching the crossing at 26 mph. The engineer sounded the horn and put the train into emergency braking. The train had slowed to about 19 mph when it struck the left side of the motorcoach, pushing it about 203 feet before coming to a stop.

The preliminary report does not yet indicate a probable cause. NTSB investigators continue to examine issues related to the railroad grade crossing signage and maintenance, as well as the crashworthiness of the motorcoach.