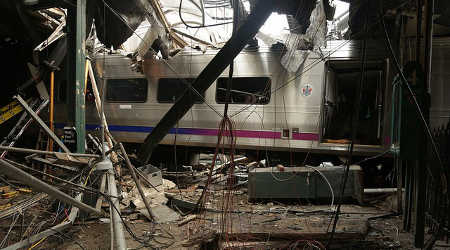 The NTSB made two recommendations to NJ Transit and the Metropolitan Transportation Authority (LIRR's parent organization) and two to the Federal Railroad Administration (FRA).

"Today's new recommendations, if acted upon, have the potential to eliminate end-of-track collisions," said NTSB Chairman Robert Sumwalt. "That translates to protection for passengers on trains, and for people standing on terminal platforms."

The complete accident report will be available in several weeks, board officials said.

In August 2017, the NTSB expressed "disappointment" with the withdrawal of a notice of proposed rule-making by the FRA and Federal Motor Carrier Safety Administration. The rule would have addressed rail workers and commercial drivers who may be affected by obstructive sleep apnea.

"Obstructive sleep apnea has been in the probable cause of 10 highway and rail accidents investigated by the NTSB in the past 17 years," board officials said. "Medical fitness and fatigue, two of the NTSB's 10 Most Wanted List of Transportation Safety Improvements for 2017-2018, are tied to obstructive sleep apnea.