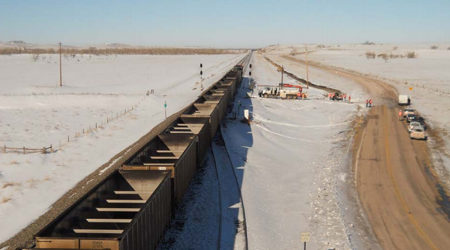 The National Transportation Safety Board (NTSB) has determined the probable cause of a 2017 fatal accident involving a BNSF Railway Co. train in South Dakota was caused by the improper use of a train approach warning.

The accident occurred Jan. 17, 2017, in Edgemont, South Dakota, when a BNSF train struck and killed two roadway workers, including the watchman/lookout. A three-member roadway crew had been cleaning snow and ice from the track switch on the main track to prepare for the movement of a train that was to have its brake system tested.

The crew of the striking train sounded the train horn and bell, and both members of the train crew applied emergency braking. However, there was no response from the roadway work group and the train was unable to stop before reaching the location, according to the NTSB's report.

The board determined that the probable cause of the accident was the "improper use of train approach warning by the BNSF Railway roadway work group to provide on-track safety," NTSB officials said.

The NTSB added that the Federal Railroad Administration's "inconsistent enforcement of federal regulations requiring that railroads equip watchman/lookouts" also contributed to the accident.