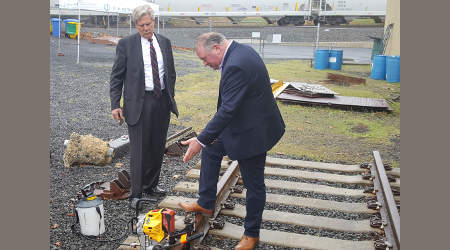 The House Subcommittee on Railroads, Pipelines and Hazardous Materials called the hearing to solicit input on industry regulations.

"We need regulations that are more efficient, more goal oriented, less reliant on a one-size-fits-all mindset, and much more focused on costs and benefits,” said Darr, according to a press release of her comments.

Also testifying before the subcommittee was John Tolman, vice president and national legislative representative for the Brotherhood of Locomotive Engineers and Trainmen (BLET), who called on Congress to invest in the nation's infrastructure and address rail worker fatigue and other safety regulations.

The lack of proper infrastructure funding has had a major negative impact on rail commuters, especially along the East Coast, Tolman said, according to a press release of his testimony.

"Tunnels are being used to carry passenger trains into and out of New York City that were built in the early 1900s," Tolman said. "Penn Station in New York is forced to handle three times as many trains as it was designed to accommodate. And every day three railroads, scores of employers, and hundreds of thousands of commuters cross their fingers that this won't be the day that infrastructure fails in a catastrophic way."

A railroad can build and maintain world-class infrastructure, "but if the issue of fatigue on the nation's railroads is not addressed in a serious and fundamental way, then catastrophic accidents will not cease," he said.

"Technology can help with the problem, but technologies such as positive train control (PTC) alone will not solve the problem," Tolman said. "Further, PTC has not been designed to be an answer to over-worked train crews who toil around the clock with unpredictable on-duty times."