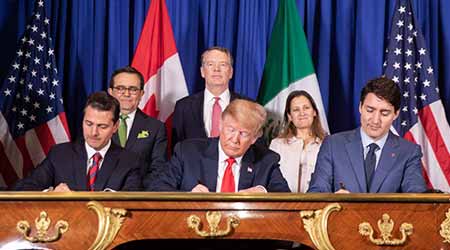 Hamberger issued a statement after the pact was signed late last week by President Donald Trump, Mexico's President Enrique Pena Nieto and Canada's Prime Minister Justin Trudeau in Argentina, where world leaders were gathered for the economic summit of the Group of 20, or G-20.

"The private freight railroad industry congratulates leaders from Canada, Mexico and the United States for signing the USMCA, an important step in preserving free trade across North America," said Hamberger. "The seamless movement of goods between our nations — via private railroads, as well as trucks — makes our economies stronger and more competitive."

If approved by Congress, the USMCA would replace the 25-year-old North American Free Trade Agreement (NAFTA).

"NAFTA was in need of an update, particularly in areas like digital commerce that didn’t exist a quarter-century ago," said NRF President and CEO Matthew Shay in a press release. "While there may be disagreements over details, it is critical that Congress approves this agreement in 2019 and that NAFTA remains in place until that can be done. The administration should continue to work to quickly resolve the outstanding issues."