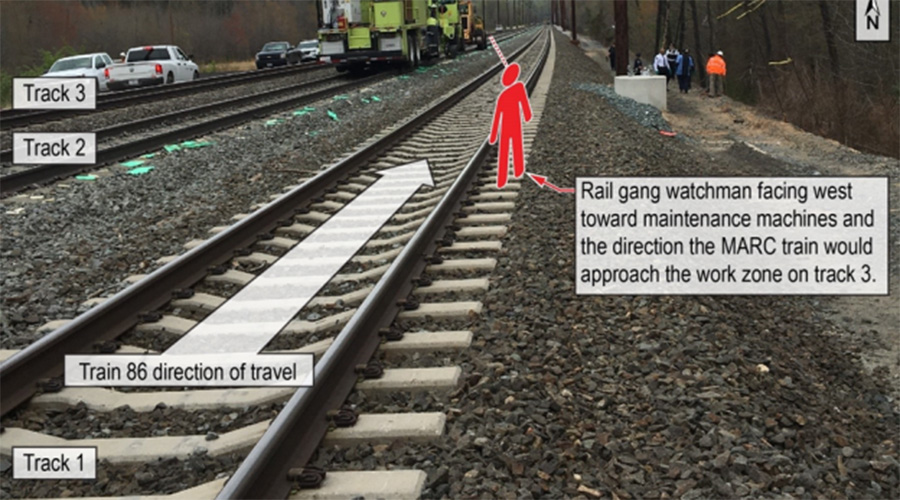 [Editor's note: This story has been updated with a comment from Amtrak.]

The National Transportation Safety Board (NTSB) Thursday again called on the Federal Railroad Administration (FRA) and Amtrak to put an immediate end to the use of "train approach warning" (TAW) as the sole method of on-track safety in areas covered by positive train control.

The safety recommendations issued in Railroad Accident Report 21/02, are based on the April 24, 2018, accident where an Amtrak rail watchman was killed in Bowie, Maryland. The NTSB determined that Amtrak’s "insufficient site-specific safety work plan for the Bowie project did not adequately consider the challenges of multiple main tracks in a high-noise environment," NTSB officials said.

The watchman in this case was focused on the movement of a southbound MARC commuter train when he was struck from behind by a high-speed northbound Amtrak train, they said.

"Amtrak’s decision to use TAW in a high-risk area allowed roadway workers to be exposed to the dangers of simultaneous bi-directional train movements at speeds up to 125 mph," they said.

Amtrak issued the following response to the NTSB report: "We appreciate the NTSB’s thorough report and we have already taken several steps to ensure this type of incident won't happen again. The safety of our employees and customers is Amtrak’s highest priority. We are reviewing the report and recommendations and will look to implement reasonable actions to meet the intent of the recommendations and ensure the ongoing safety of our employees."

NTSB Chair Jennifer Homendy said Thursday that railroads need not wait for the FRA to act. In a letter to Amtrak and the Class Is, Homendy said the continued use of TAW circumvents the protections that would be provided by positive train control (PTC) in controlled track territory.

"In short, the decades of funding, research, equipment and training you have put into the implementation of PTC is being undone by the continued use of TAW," Homendy’s letter said. "The continued use of TAW as a method of on-track safety is a deadly risk that your roadway workers cannot be asked to bear."

"More action needs to be taken to protect train crews, maintenance-of-way employees, and mechanical workers from getting killed or injured," said NTSB Member Thomas Chapman, who has focused on improving the safety of railway workers. "We have found from our investigations that many of these accidents are, tragically, preventable."