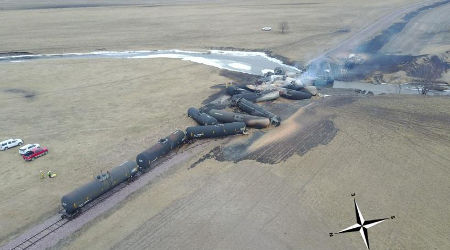 The National Transportation Safety Board (NTSB) has determined that a broken rail, inadequate track maintenance and inspection and inadequate federal oversight led to the derailment of an ethanol train in Iowa last year.

The board also ruled that the continued use of DOT-111 tank rail cars to haul ethanol — instead of the "more robust" DOT-117 tank cars — contributed to the severity of the accident, which led to the spilling of 322,000 gallons of undenatured ethanol that fueled a 36-hour post-accident fire, NTSB officials said in a press release.

No one was injured in the derailment, which occurred March 10, 2017, near Graettinger. The incident involved a Union Pacific Railroad train that consisted of three locomotives, 98 loaded tank cars and two buffer cars filled with sand.

Twenty of the loaded tank cars derailed, and 14 of the 20 derailed cars released the ethanol. Of the 14, 10 were breached from mechanical damage. Four tank cars with shell damage released undenatured ethanol.

"The use of DOT-117 cars, instead of the DOT-111 tank rail cars involved in the accident, would have mitigated or prevented the release of ethanol most of the derailed cars," NTSB officials said, citing their report on the incident.

NTSB investigators concluded that UP had not maintained the track structure in a region of rail that included the accident location in accordance with Federal Railroad Administration (FRA) standards or its own standards. In addition, they determined FRA inspectors didn't report all defective crosstie conditions observed in the region.

Moreover, the investigators said in the report that FRA inspectors were not using all available enforcement options to gain UP compliance with minimum track safety standards.

Alcohol, drug or cell-phone use were not factors in the accident, nor were the train's mechanical condition, the train crew's performance or the emergency response, the report stated.

Recommendations to the FRA, the Pipeline and Hazardous Materials Safety Administration and UP address training on safety standards and available enforcement options for federal track inspectors; the need for research to determine if safety would be improved by transporting ethanol in an undenatured state; and the need for UP to re-examine track maintenance and inspection program standards on all routed carrying high hazardous flammable materials.