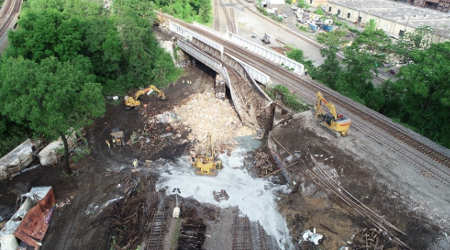 The National Transportation Safety Board (NTSB) yesterday released a preliminary report of its investigation into the May 19 derailment of a CSX train in Alexandria, Virginia.

The derailment occurred about 500 feet north of two CSX bridges that cross Norfolk Southern Railway tracks. A CSX bridge on main track No. 1 was extensively damaged; a CSX bridge for main tracks No. 2 and 3 remained in service. Some of the derailed CSX cars fouled the NS tracks below the bridge, according to the NTSB report.

The train consisted of three locomotives, 91 loaded cars and 76 empty cars. No cars were carrying hazardous materials. The train crew was not injured.

Damage is estimated to be $5 million to $7 million.

The NTSB's investigation is continuing. Parties to the investigation include the Federal Railroad Administration, the Virginia State Corporation Commission, CSX and the Brotherhood of Maintenance of Way Employes Division.