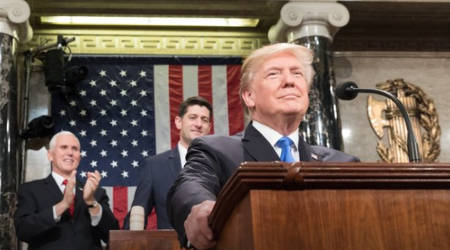 In his first State of the Union address, Trump said he wants a bill that will generate "at least $1.5 trillion for the new infrastructure investment we need."

Although he was short on specifics, the president said every federal dollar invested should be "leveraged by partnering with state and local governments and, where appropriate, tapping into private sector investment to permanently fix the infrastructure deficit."

Trump also said the bill must streamline the permitting and approval process for projects to no more than two years.

"We will build gleaming new roads, bridges, highways, railways and waterways across our land," said Trump.

After the speech, several transportation-related association leaders issued written reactions. Following are excerpts from some of those responses:

• American Association of State Highway and Transportation Officials (AASHTO) Executive Director Bud Wright:
"AASHTO has for years called for a long-term strategy to shore up the Highway Trust Fund in order to maintain federal investment in surface transportation. We are looking forward to seeing the President's infrastructure plan and working closely with the administration and Congress to advance a robust, long-term infrastructure bill that supports needed reforms such as streamlining project delivery in ways that also protect our natural resources."

• American Council of Engineering Companies President and CEO David Raymond:
"The President's focus on infrastructure is commendable, but without real federal funding to address the huge backlog of desperately needed improvements to the nation's roads, bridges, public transit, airports, water systems, and other critical assets, it's an empty promise."

• American Trucking Associations President and CEO Chris Spear:
"Roads are not a partisan issue — they’re driven on by Republicans and Democrats alike. As both sides of Capitol Hill know, modernizing our infrastructure will require a substantial investment — actual, real revenue. America cannot be rebuilt with funding gimmicks and finance schemes."

• Associated General Contractors of America CEO Stephen Sandherr:
"President Trump made a strong and compelling case for Congress to work in a bipartisan manner to provide an additional $1.5 trillion in new infrastructure investments. These investments will help improve aging public works and allow state and local officials to make the kind of investments needed to maintain our global economic competitiveness."

• Coalition for America's Gateways & Trade Corridors Chairman Tim Lovain:
"I commend the Administration and Congress for prioritizing infrastructure in 2018. Freight movement across all modes is expected to grow nearly 42 percent by 2040 — without a strategic campaign of investment, this opportunity has potential to overburden infrastructure and create a drag on our national economy."