In 2014, there were 267 fatalities and 832 injuries caused by grade crossing accidents, according to Federal Railroad Administration (FRA) statistics. Although the number of injuries fell significantly from the 972 registered in 2013, the number of fatalities rose a bit from 231 in the prior year.

Crossing accident data for 2015 won’t be available until early March, but Federal Railroad Administrator Sarah Feinberg is hopeful that both the number of fatalities and injuries show declines from 2014 levels. She has prioritized crossing safety in her administration and has elevated the FRA’s efforts over the past year-plus to prevent accidents.

During a speech at an American Association of State Highway and Transportation Officials briefing Feb. 25 in Washington, D.C., Feinberg said few issues have been as important in her first year as administrator and acting administrator as improving safety at crossings.

“It is a top priority because we can and must do better,” she said.

One way the FRA has been trying to do just that: pumping more federal dollars into crossing upgrades and improvements. The agency’s recent allocation of $10 million in grants for nine crossing projects in eight states brought Feinberg to Milwaukee Feb. 20. She joined Sen. Tammy Baldwin (D-Wis.) to announce a $3 million grant to the state of Wisconsin to boost safety at 10 crossings along 10 miles of a sealed corridor in Waukesha County, which borders Milwaukee County. 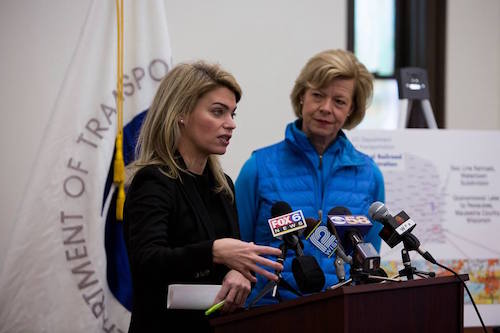 Feinberg believes there are a number of opportunities for the FRA to improve crossing safety.

“It’s an old problem that calls for new solutions. We have not had much success moving the needle,” she said Feb. 19 during an interview at the Hilton Milwaukee City Center. “The problem has changed over time. People are talking on their cell phones and texting.”

“The FRA can’t solve this problem on its own. We know it takes partnerships with law enforcement, with tech companies, and with state leaders and local safety agencies,” said Feinberg

It also takes a higher dose of proven measures, such as leveraging technologies, increasing public awareness — including distracted driving programs — and improving signage.

There are about 250,000 public and private crossings in the United States. Of the approximately 130,0000 public crossings, ony about half have automatic warning systems, one-third of them have flashing lights and gates, and slightly more than one-tenth are grade separated.

The FRA earlier this month advised state departments of transportation to verify that crossing warning systems interconnected to traffic lights are functioning properly to avoid collisions. The agency also called on the states to add event recorders to traffic lights connected to about 5,000 crossings to provide inspectors with information that can be used to improve safety.

To bolster safety at more of the nation’s crossings, the FRA, railroads, states and communities can do a better job with equipment and signs, Feinberg believes. She saw firsthand what better equipment and signage could mean to a portion of a community while she was in New Orleans Feb. 16 and 18 to meet with the Gulf Coast Working Group, which aims to restore some passenger-rail service. Feinberg was in Baton Rouge, La., Feb. 17 to promote the $1.1 million allocated for crossing improvements in the city.

While in New Orleans, she observed an area with four schools clustered close together that’s near several crossings featuring only yield signs.

“There aren’t any gates or signals. Those crossings aren’t a problem for the locals, but they are a problem for people who aren’t familiar with the area and the roads,” said Feinberg. 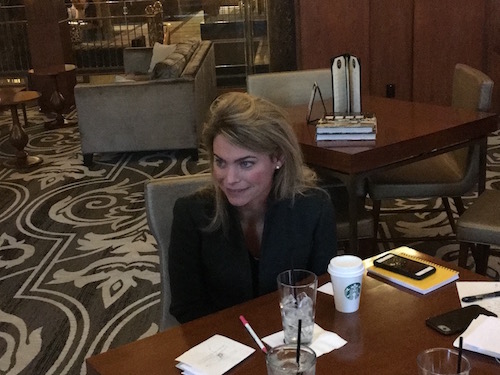 That’s just the type of situation the FRA is seeking change, she said. Other changes benefitting crossing safety might come about because of a task force Feinberg established in February 2015.

Essentially a clearinghouse for the latest crossing safety information, the task force shares findings of various research projects with railroads and law enforcement agencies, which can incorporate any new insights into their own safety strategies.

Moreover, the FRA’s partnering efforts with technology firms could help prevent accidents by making motorists more aware of crossings. The agency in mid-2015 teamed up with Google, which agreed to integrate the FRA's GIS data to pinpoint the location of the nation’s 250,000 crossings into its GPS mapping services. GPS devices don’t inform users about any crossings along their route, so adding the data into smartphone mapping applications will provide motorists an additional alert when they are approaching a crossing, said Feinberg.

Google so far has added data points for 125,000 crossings in its first batch of data integration, she said. Apple similarly plans to add the data points, and the FRA continues to work with other tech firms.

“We are building partnerships,” said Feinberg.

Now, the FRA needs to build more off of what it believes is a more solid foundation for crossing safety. The soon-to-be released 2015 accident data will let Feinberg & Co. know if their recent charge is garnering results.

Editor's Note: The FRA released preliminary 2015 crossing safety data on March 3. The data shows fatalities dropped to 244 and the total number of incidents at public crossings fell from 1,968 in 2014 to 1,780 in 2015. But the number of crossing accident injuries climbed to 967 last year. Feinberg issued the following statement about the latest figures: "The 2015 numbers show we are heading in the right direction, but our work is far from done. Far too many people are still being injured or killed at railroad crossings. We can and must do more. The FRA will continue to take an all of the above approach to address this decades-old safety challenge, working with all partners and stakeholders, until we reach our ultimate goal of preventing all crossing fatalities and injuries."