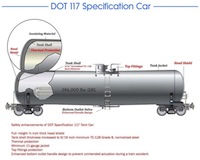 A new federal rule governing the transportation of crude oil by rail signals the beginning of the next chapter in rail safety. That’s how Acting Federal Railroad Administrator Sarah Feinberg characterized the rule after the U.S. Department of Transportation (USDOT) introduced it on May 1.

The rule stipulates that new tank cars built after Oct. 1, 2015, must meet design and performance requirements for a new USDOT-specified class, the DOT-117. The rule also requires the replacement of all DOT-111 tank cars within three years and all non-jacketed CPC-1232 cars within five years; the installation of a two-way, end-of-train device or a distributed power braking system, and electronically controlled pneumatic (ECP) braking systems; the restriction of crude train speed to 50 mph in all areas and 40 mph in high-threat urban areas; and the implementation of other measures, such as a detailed routing analysis. 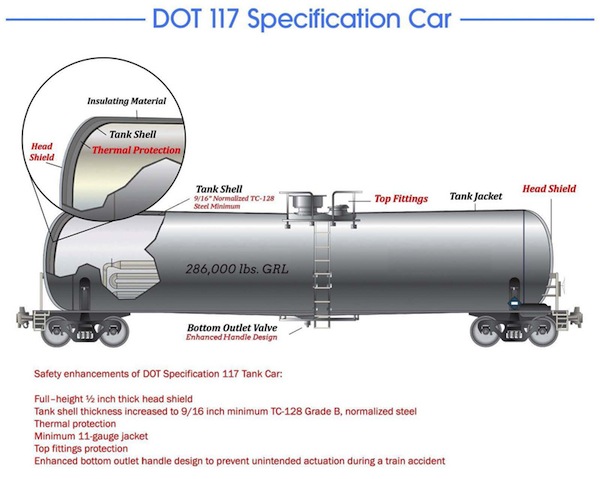 But in the weeks following the rule’s release, several crude-by-rail constituents filed lawsuits or took other actions because they believe the rule’s safety-enhancing requirements either go too far or don’t go far enough.

The Association of American Railroads (AAR) is in the gone-too-far camp. The rule should not have included an ECP brake requirement because the government had no substantial evidence to support a safety justification for mandating the brakes other than an outdated study, AAR officials believe. In addition, it would cost railroads billions of dollars to install the brakes on tank cars used in unit trains, according to association estimates.

"Unjustified regulations such as this trigger a reallocation of investments that will not generate the kind of safety benefits the industry and the public expects. The regulation does not take into account the disruption the ECP mandate will wreak on railroad — both freight and passenger — operations," said AAR President and Chief Executive Officer Ed Hamberger in a statement issued shortly after the rule was released. "The USDOT’s study is flawed and ECP brakes do not significantly improve safety and are unreliable. No justified safety case for ECP brakes has ever been made."

As of press time, the association continued to evaluate the entire rule and weigh its opposition options, such as by filing an appeal with the USDOT or pursuing a court proceeding, according to AAR spokesman Ed Greenberg.

[Editor's note: The AAR on June 12 issued an appeal with the USDOT to challenge portions of the rule. For more information, read this Daily News item published on June 15.]

The American Petroleum Institute (API) already filed a lawsuit against the USDOT last month. The institute is challenging the rule’s timeline for retrofitting or retiring older tank cars and the ECP brake mandate. The car timeline isn’t realistic and the brake’s benefits versus costs aren’t well quantified, API officials believe.

"Our safety goal is zero incidents, so retrofit timelines, braking systems and other actions must all be based on facts and science to maximize the safety impact of this rule," API officials said in a statement.

Two Illinois municipalities also filed a lawsuit against the USDOT last month seeking a review of the rule. Leaders with the city of Aurora and village of Barrington claim the rule is too lax in governing the safety of both new and older tank cars. They believe it should cover the safety of all cars on a crude train — not just a minimum of 35 cars on a unit train — and not allow some older cars to be used for many more years.

The coalition claims the rule enables the usage of some tank cars for up to 10 years, leaves communities and emergency responders "in the dark" about crude-train traffic, subjects retrofitted cars to a less protective standard and doesn’t impose adequate speed limits to ensure crude trains operate at safe speeds, according to a press release.

The rule "clearly was influenced" by the industry and won’t prevent more explosions and fires in communities, said Waterkeeper Alliance Executive Director Marc Yaggi, adding that the coalition hopes its challenge will result in a rule that places more emphasis on safety.

Meanwhile, implications associated with tank-car ownership — and not safety — prompted BNSF Railway Co. last month to drop its plan to acquire up to 5,000 next-generation tank cars.

Last year, BNSF issued a request for proposals for 5,000 tank cars that would exceed stronger standards voluntarily adopted by the rail industry in October 2011. But shippers convinced BNSF executives to scrap the plan, according to a customer letter issued last month.

"While this step was initially received positively, subsequent conversations with … customers indicated many had concerns, and BNSF owning or leasing tank cars was not viewed as useful," states the letter signed by BNSF Executive Vice President and Chief Marketing Officer Steve Bobb, and EVP and Chief Operations Officer Greg Fox.

BNSF will work with customers to soon make the transition to next-generation or retrofitted cars, they said.

Tesoro partnered with Union Tank Car Co. in February 2014 to develop the new tank car, which is expected to enter service later this year when enough are available to form a full unit train.

"Connecting domestically produced crude oil with U.S. refining centers by rail supports American jobs and enhances our energy security, but these benefits are null if it can’t be done safely and efficiently," said Tesoro Executive Vice President of Operations Keith Casey in a press release.