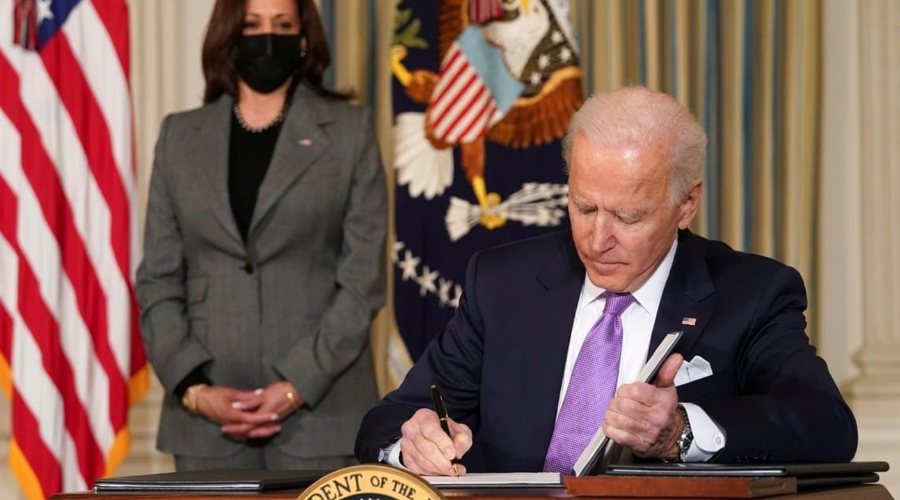 Rail industry officials offered mixed reactions to President Joe Biden's July 9 executive order (EO) on economic competition. Among many provisions, the order calls on the Surface Transportation Board (STB) to require freight railroads to provide rights of way to passenger rail and to strengthen their obligations to treat other freight companies fairly.

The EO includes 72 initiatives drawn up by more than a dozen federal agencies "to promptly tackle some of the most pressing competition problems" across the U.S. economy, according to a White House fact sheet.

STB Chairman Martin Oberman welcomed the nationwide policy and "joins the concerns" outlined in the EO, he said in a prepared statement.

"The president’s emphasis on improving the competitive landscape across the entire economy fits well with my view of the board’s mission in the current rail environment," Oberman said.

The call for railroad track owners to provide rights of way to passenger rail likely would impact Amtrak’s effort to gain easier access to freight railroads’ track on which Amtrak trains operate.

"Freight railroads that own the tracks can privilege their own freight traffic — making it harder for passenger trains to have on-time service — and can overcharge other companies’ freight cars," the EO fact sheet states.

"Earlier this year, I formed an internal working group to advise the board on the resources necessary to fulfill the agency’s responsibilities to investigate compliance with the new on-time performance standards and, starting next year, to ensure that those standards are enforced,” he said. “I will be making an announcement about those efforts in the near future."

"Encouraging the Surface Transportation Board to protect Amtrak’s rights to use freight railroad tracks and prioritize passenger trains will provide more sustainable and equitable transportation options across America," he said. "We appreciate the president’s continued support for Amtrak’s plans to bring passenger-rail service to more of America.

However, Association of American Railroads (AAR) officials find the EO includes a "misguided direction to interfere with functioning freight markets that could ultimately undermine railroads' ability to reliably serve customers," they said in a prepared statement.

In a July 26 op-ed in The Chicago Tribune, AAR President and Chief Executive Officer Ian Jefferies said the Biden administration has wrongly singled out railroads as anticompetitive, and that the EO’s proposed measures would result in higher prices to consumers.

“By gumming up the rail network, it would also exacerbate and potentially cement inefficiencies for rail partners within the supply chain, which is currently quelling more robust growth,” Jefferies wrote.

For example, the EO calls on the STB to consider a forced switching rule as part of an effort to treat freight shippers fairly.

“Known as ‘competitive switching,’ such forced access would allow companies dissatisfied with the prices they pay to ship products over rail lines to petition the government to intervene on their behalf to force a railroad to use its infrastructure to hand business to its competitor,” Jefferies wrote. “It is like ordering Coca-Cola to allow Pepsi to produce and bottle soda at its facility.”

Jefferies described the competitive switching measure as a push for re-regulation — not because of a market failure, but because some shippers don’t like the price they pay for rail transportation.

“But thanks to competition among various modes of transportation, rail rates have fallen 44% since the government largely removed itself from setting freight rates in the 1980s,” Jefferies wrote.

Analysts: EO not as bad as feared

Reciprocal switching has gone nowhere with the STB since the idea was reintroduced in 2016, they noted.

Even if reciprocal switching was implemented in the United States, it would take significant time for the STB, railroads and shippers to process those changes, and likely result in unintended consequences, including more operational complexity for networks and potentially deteriorating service, Baird analysts claim.

In other reactions to the EO, Canadian Pacific officials believe it sends the message that no rail mergers should be allowed if they would reduce competition or hurt passenger service, and that the U.S. economy needs more competition among railways.

In addition, CN-KCS would present more challenges for existing Amtrak service operating on CN lines south of Chicago, CP officials said. Those same lines “already have a history of operating issues and one of the worst on-time performance records in the industry, and challenges for the desired establishment of future passenger service in Louisiana,” they added.