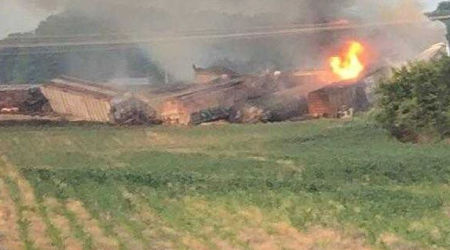 A CSX train derailed last night in southwest Indiana near Princeton, causing a number of rail cars to catch fire.

The train derailed at about 8:10 p.m. about an hour from Evansville. Preliminary reports indicated a release from a rail car containing propane, a CSX spokesman said in an email.

No injuries were reported and no waterways have been affected, the spokesman said. The train consisted of two locomotives, 89 loaded rail cars and nine empty cars.

The Class I confirmed that 23 cars derailed, including five containing propane.

"CSX and local firefighters are monitoring two propane railcars and two railcars containing frozen food that caught fire during the derailment," the spokesman said. "First responders determined an evacuation was necessary for the safety of the neighboring public, and it will stay in place until further notice."

Local news media reported that the Gibson County Sheriff's Office received calls about the derailment and an explosion. First responders evacuated homes and businesses within a 1-mile radius of the derailment, according to the USA Today Network.