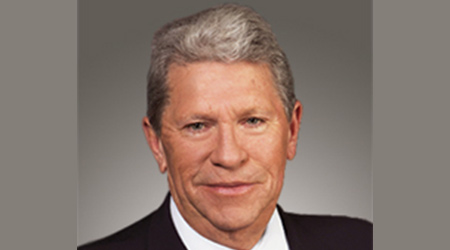 E. Hunter Harrison last month retired early as president and chief executive officer of Canadian Pacific in an apparent bid to pursue opportunities at other Class Is — CSX's top post presumably chief among them.

His departure, which took effect Jan. 31, came five months ahead of schedule.

The leadership situation at CP unfolded after Harrison approached the Class I's board to discuss modifications to his employment arrangements that would allow him to explore other opportunities. A special committee then recommended that CP enter a separation agreement with him, officials from the railroad said in a press release.

The decision followed negotiations and careful deliberations, as well as the receipt of independent legal advice, CP officials said.

As part of the separation agreement, the Class I agreed to a limited waiver of Harrison’s non-competition obligations, while Harrison agreed to forfeit 118 million Canadian dollars worth of benefits and awards.

In addition, Harrison agreed to sell all his CP shares by May 31.

"CP will have no role in Mr. Harrison’s future endeavors," officials from the Class I said in a statement.

Those endeavors might include a takeover of CSX’s CEO position. Harrison has partnered with activist investor Paul Hilal’s new investment fund Mantle Ridge LP, which reportedly has raised more than $1 billion to acquire a stake in CSX, according to a Jan. 18 Reuters article.

Mantle Ridge is in talks with CSX to install more than three new board members, the news agency reported.

Harrison's partnership with Mantle Ridge may improve his chances at getting the top job at CSX, according to a report by Benjamin Hartford, a senior research analyst at Robert W. Baird & Co. Inc.

"We had initially assigned a low probability of Harrison landing at CSX … but the reported involvement of an activist investor clearly increases this likelihood considerably," Hartford wrote in the report.

Although Harrison in early 2016 pushed for a plan for CP to acquire Norfolk Southern Railway, joining CSX would be a "more logical" move, Hartford said. That's because NS CEO Jim Squires is "relatively new" in his job, while Michael Ward has been serving as CEO of CSX since January 2003, he added.

During his time at CP, Harrison helped reduce operating costs and improve profitability — achievements that may be attractive to CSX shareholders, Hartford said.

CSX plans to "actively evaluate" Mantle Ridge's views and discuss its earnings-growth strategy with the firm and all shareholders, spokesman Gary Sease said in a statement.

"CSX Corp. welcomes the views of all of our shareholders and always considers their thoughts on the company’s business and strategy," Sease said.

Meanwhile, Keith Creel succeeded Harrison as CEO of CP. Under the previous arrangement, Creel wasn't slated to take the reins until July.

Creel served as president and chief operating officer since February 2013. He joined the railroad’s board in May 2015.