For years, CSX Corp. has worked with law enforcement agencies on joint security training and preparedness exercises. The Class I also long has tried to provide critical cargo information to state homeland security officers, local first responders and other officials to help them ensure the public’s safety.

Since the early 1990s, CSX has generated hazardous materials density reports for local emergency response and planning officials that include specific information on chemicals and other hazmat shipments moved through a particular community. And since 2007, the railroad has offered a map-based monitoring tool that enables homeland security and emergency management center officials to trace trains and rail cars in near real time.

Now, CSX is trying to provide vital cargo information in more ways, more detail and more immediacy, as well as in easier-to-use formats. To that end, the railroad in late August introduced Rail Respond, a mobile emergency information application. Using the app on any web-enabled device, first responders can look up the contents of a rail car or obtain train-list information in real time.

CSX aims to balance the need for transparency with the importance of protecting information from falling into the wrong hands — especially after 9/11, says spokesperson Melanie Cost. So, the Class I has attempted to leverage evolving technologies and collaborate more with constituents to improve its information-sharing tools.

“We know that having the facts — for planning and during an incident response — can make all the difference for keeping responders and the public safe,” says Cost. 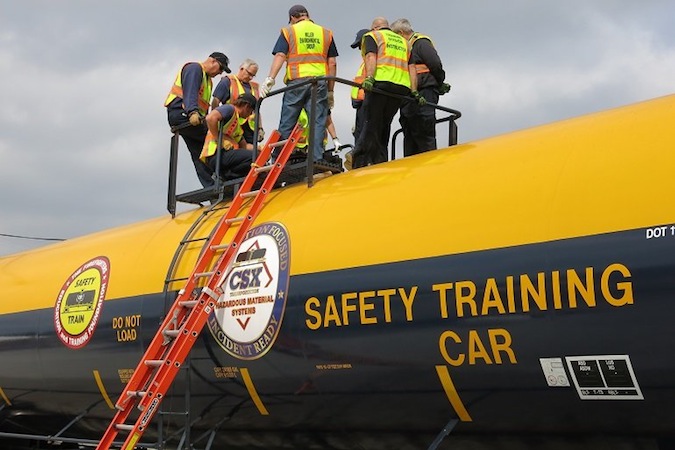 The railroad has made information-sharing strides from the original Community Emergency Response Guide paper document sent to 13,000 jurisdictions in CSX’s network, she says. Among the first: SecureNOW, which enables public safety and security officials to access to CSX’s Network Operations Workstation to track the location of trains and specific cars.

Introduced in 2007, the system initially covered the railroad’s operations in New Jersey and New York. But over the past eight years, it’s been expanded to 20 of the 23 states in CSX’s network, including focuses on the Philadelphia and Washington, D.C., areas. A SecureNOW system is in place at the U.S. Department of Transportation, Transportation Security Administration and CHEMTREC, a communications center for emergency responders established by the chemical industry in 1971.

The system displays CSX trains that are operating in certain municipalities or moving into high-threat urban areas. SecureNOW is designed to help state homeland security and local law enforcement officers identify the status of trains and cars, and better prepare for and respond to emergencies.

Launched in late August, the app is expected to attract about 8,000 users by year's end. Source: CSX Corp.

Now, Rail Respond is the “new kid on the block” that enables CSX to better share info with emergency responders and law enforcement officials, says Skip Elliott, CSX’s vice president of public safety, health and environment. The free-to-use application can be accessed from any Android-, iOS- or Windows-based mobile device.

After signing in with an I.D. and password, a user can learn the contents of any train or car in real time, including the hazard classification, and toxic or poison inhalation hazard identification number. Rail Respond also provides a car’s diagram, volume, weight, load status, shipment packing group and train position.

Hazmat-carrying cars are highlighted for easier identification. The application is designed to help guide responders as they walk along a train to locate specific cars.

Last year, CSX developed the app with assistance from the Operation Respond Institute, which created a computer-based system that provides emergency responders with information about a rail car’s hazmat contents. The Class I purchased the Operation Respond technology and re-launched it in August as Rail Respond with additional features and what CSX executives characterize as a more user-friendly design.

Rail Respond builds on the railroad’s existing suite of tools for first responders, as well as meets and exceeds recommendations from the National Transportation Safety Board for improving information sharing, says Elliott.

Along with the other Class Is, CSX supports the Association of American Railroads’ AskRail™ tool, which enables first responders to use their smartphones to retrieve data about rail-car contents. But Rail Respond takes information sharing several steps further, says Elliott.

“We prefer to provide more specific information,” he says. “Rail Respond provides locomotive data, which we think is important. An emergency responder can know how much fuel is left in the locomotive’s fuel tank.”

Rail Respond offers two user levels: basic and advanced. Basic access is granted to firefighters and other responders, who can look up all information except trainset lists. Advanced access to all info is provided to fire and police chiefs, and other incident command officers.

In addition to obtaining train and car data, users can view an isolation zone based on a commodity’s characteristics and the proximity to day care centers, hospitals, schools and other sensitive facilities; access satellite imagery to zoom into a specific area; and obtain weather data to learn about any impending storms.

By year’s end or in early 2016, CSX plans to add a feature to Rail Respond that will enable users to identify water intakes and watersheds. The feature is designed to help responders coordinate efforts with local water authorities.

The railroad performs real-time monitoring of Rail Respond to ensure the app’s security. Controls are in place to notify CSX officials about any system abuse. If a user accesses car or trainset info, an automatic alert is sent to CSX’s Public Safety Coordination Center, which prompts a phone call to the user to determine the nature of an emergency and how the railroad can provide assistance.

“We want to make sure no one goes on a shopping spree of car numbers. We know who is making the inquiries,” says Elliott.

So far, about 4,000 emergency responders are using Rail Respond — a number that’s expected to grow to 8,000 by year’s end.

When CSX debuted the app Aug. 28 at the International Association of Fire Chiefs’ (IAFC) annual expo in Atlanta, more than 2,000 responders and fire officials viewed a demonstration.

“Then, 539 of them signed up to use it,” says John McFall, CSX’s manager of emergency planning and coordination-public safety, who manages the Rail Respond program.

One committee member suggested CSX add the capacity of tank cars to the application instead of only showing a car’s current volume, so that data was incorporated into the app, he says.

“This real-time critical information is a game changer for public safety as it allows the use of today's smart device technology and computers to easily access the information when and where needed and at no cost,” Werner says. “Additionally, CSX has demonstrated its commitment to work with public safety to continue to listen and make improvements to Rail Respond.”