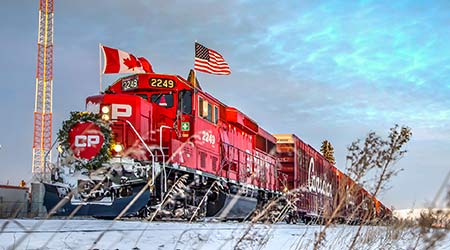 Decorated with thousands of colorful and glittering lights, the trains will depart on the U.S. tour on Nov. 25 and the Canadian tour, Nov. 26.

Launched in 1999, the annual tour collects donations of dollars and food on its annual trip across Canada and the northern United States. Since its inception, the train has raised more than CA$15.8 million and collected 4.5 million pounds of food, CP officials said in a press release.

"Access to nutritious food is a basic necessity, and food bank usage is on the rise across North America," said CP President and Chief Executive Officer Keith Creel. "The CP Holiday Train program is our way to help in the fight against hunger by growing awareness of this issue and providing a fun and engaging way for the public to show their support.”

The entire 2019 schedule of the U.S. and Canadian routes is available on CP's website.