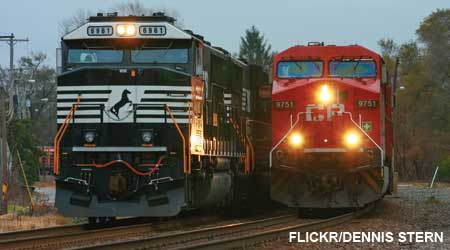 Canadian Pacific appears to have dropped the proxy-fight strategy for its proposed acquisition of Norfolk Southern Corp. Yesterday, CP notified NS of its intent to submit a resolution to NS shareholders to ask the NS board to "engage in good faith discussions" with CP regarding the Class I's proposed takeover of NS, according to a Feb. 9 press release.

The shareholder resolution — which would be voted on at the NS annual meeting later this year — merely asks NS shareholders to formally vote "in favor of what they have been saying to CP anecdotally for months," CP said.

"We are not asking NS shareholders to vote on the existing proposal; we are simply asking them to vote in favor of having their board talk to us," added CP Chief Executive Officer E. Hunter Harrison. "We continue to believe in the potential to create a transcontinental railroad with NS and believe this is a fair and measured approach to getting a deal done."

In a response issued a few hours later, NS officials said the  railroad's board already had met with CP and "publicly provided clear detail" regarding the board’s concerns.

"While CP continues to publicly declare that NS should 'talk to CP about a potential combination,' we believe further discussions are not in the best interests of NS shareholders unless CP offers NS shareholders compelling value and addresses the regulatory issues inherent in its proposal," NS said, reiterating that its board had "carefully considered and unanimously rejected" each of CP’s three proposals.

NS officials also said that CP hadn't addressed the NS board’s concerns or sought a declaratory order from the Surface Transportation Board that would "provide clarity regarding the likelihood of regulatory approval of its voting trust structure." NS also reasserted what it considers to be in the best interest of NS shareholders: continuing to execute the railroad's recently announced strategic plan.

CP has made three offers to acquire NS, and NS has rejected the offers as "grossly inadequate." CP also has published three white papers related to its proposed acquisition.

"Shareholders and analysts will be watching NS closely throughout 2016 and if they continue to underperform, the pressure to work with CP will only grow," Harrison said in the Feb. 9 press release.