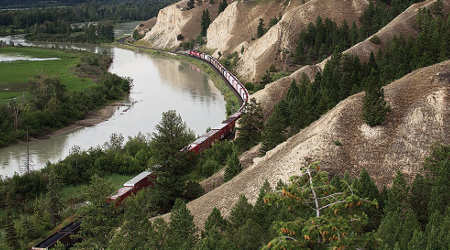 That marks a 1 percent increase compared with volume in the 2016-17 crop year, CP officials said in a press release. The figure is also 1 percent above the railroad's three-year average. Additionally, in September 2017, CP handled its most grain to date.

The railroad achieved the accomplishments by "working closely with and listening to customers and supply-chain partners," CP officials said.

"Our agricultural shippers have needs that are unique within our book of business, and we believe an ongoing dialogue with those companies is essential to understanding and meeting their needs," said Joan Hardy, who was hired in spring as vice president of sales and marketing for grain and fertilizer. "Our plans for moving this year's crop reflect that."

Through the fall, CP plans to spot 5,500 hopper cars for Canadian grain each week until the Port of Thunder Bay closes.

To improve its grain-handling capabilities, CP plans to spend more than a half-billion Canadian dollars to purchase up to 5,900 grain hopper cars. In addition, the railroad aims to continue developing an 8,500-foot train model, which calls for hauling 20 percent more grain per train than the current 7,000-foot model.

At selected locations, the railroad also will use a "power-on model," where locomotives remain at a grain elevator while a train is loaded.