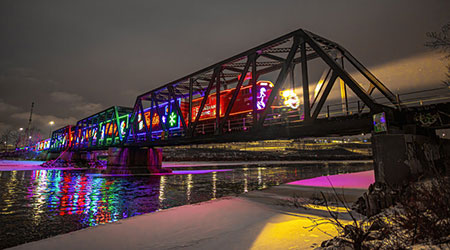 Canadian Pacific announced Tuesday that more than CA$2.49 million was raised and 238,393 pounds of food were collected for local food banks and shelves during the 21st Annual CP Holiday Train's North American tour, which wrapped up earlier this month.

Although the 2019 numbers are preliminary, CP estimates the Holiday Train has raised more than CA$16.7 million and collected 4.7 million pounds of food since its inaugural journey in 1999.

"Partnering with local food banks to raise awareness for hunger-related issues is the cornerstone that enables the success of the Holiday Train," said CP President and Chief Executive Officer Keith Creel in a press release. "Watching communities come out to celebrate and donate generously reminds us why the program continues to be so important."