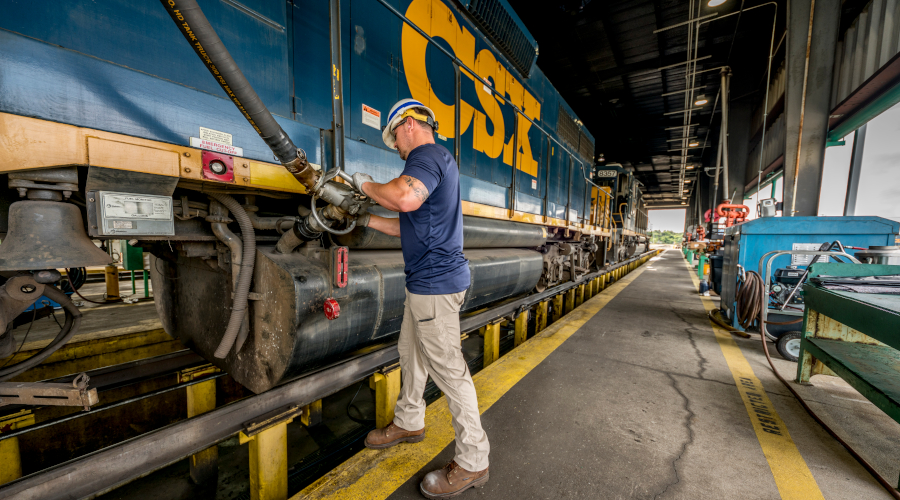 With fuel expenses for all Class I railroads steadily increasing through the years, according to individual annual reports, it’s no wonder the railroads are making moves to manage fuel usage.

While the cost of diesel is at the top of most railroads’ operating expense lists, they’re targeting other factors, such as excessive engine idling and the use of more horsepower than required, to reduce fuel consumption. For help, they often turn to technology.

For example, BNSF Railway Co., which consumed 1.43 billion gallons of fuel in 2018, has equipped 98 percent of its active locomotive fleet with an automatic engine start-stop (AESS) technology. AESS shuts down a locomotive after idling for a specified period of time as long as temperature, air pressure and battery charge parameters are met, according to BNSF spokesperson Ben Wilemon.

For example, KCS developed a compliance program to lower its horsepower per ton (HPT), which includes the use of GE Transportation’s Trip Optimizer. The system is designed to automatically control the throttle and help minimize fuel usage by calculating the most efficient way of operating a locomotive according to several factors, such as train length, weight, grade, track conditions and weather.

BNSF also uses HPT optimization to reduce fuel use while maintaining service performance. If a train has more horsepower than is necessary for a given route segment, the crew can isolate a locomotive or limit the maximum throttle position used, Wilemon said in an email.

More than 3,500 BNSF locomotives are equipped with energy management systems that allow the throttle and dynamic brake to be controlled automatically, similar to an automobile’s cruise control system, Wilemon explains.

CN also has recorded fuel efficiency gains by installing Trip Optimizer technology operational on almost 600 locomotives by the end of 2018, according to CN spokesperson Jonathan Abecassis.

CN also uses a horsepower tonnage analyzer that was built in-house. The tool gives crews instructions and real-time monitoring to ensure they only use the power needed during a trip by optimizing a locomotive’s horsepower-to-tonnage ratio. The data collected is also used for historical analysis and to identify new fuel conservation opportunities, Abecassis said in an email.

CSX upgraded its Trip Optimizer on locomotives in one subdivision to enable the system to receive PTC-generated information on real-time operating conditions, such as signal aspects, speed restrictions and other network and track conditions. With this enhancement, Trip Optimizer can incorporate additional data into its calculations of the most fuel-efficient throttle settings, enabling the technology to “plan” for these events and further increase fuel savings, Bowman said.

The Trip Optimizer with PTC soon will be tested on locomotives in additional subdivisions, Bowman said.

The railroad reduced fuel consumption by 1.6 million gallons in Q4 even with slightly higher gross ton-miles in 2018. CSX officials say they aim to drive additional efficiencies through continued improvements in network fluidity and increased utilization of fuel optimization processes and technologies.

Another fuel-saving technique railroads are employing is to reduce friction on the track.

BNSF has more than 1,500 friction modification units installed across its network. The units apply friction modifier liquid to the top of the rail as the trains roll past, reducing rolling friction — and the amount of fuel required for the trains to maintain track speed.

Training also can be part of the fuel-saving deal. To ensure technology is being used to its full potential, locomotive engineers at CN receive on-the-job training on the technologies and regional managers are provided with information to their track performance. 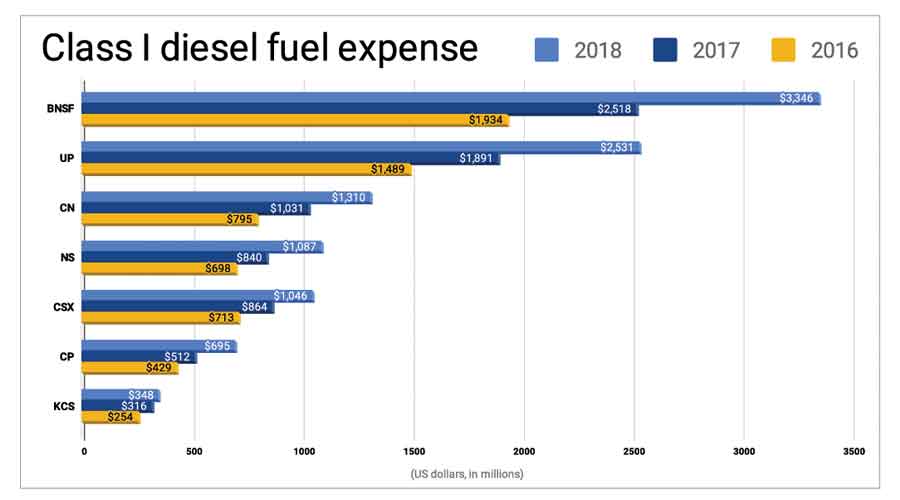 While diesel consumption has been in flux, fuel expenses for all Class Is has steadily increased through the years, according to individual annual reports.
Source: Class I annual reports

In 2011, the railroad also launched an employee engagement program, that embeds environmental sustainability into CN’s culture. The program incorporates initiatives to reduce energy consumption — including minimizing fuel use, reducing waste and improving housekeeping practices at yards and offices, Abecassis said.

Class Is also aim to keep their fleets younger, and all new power units feature the latest fuel-saving technologies.

In 2019, CN plans to add more than 100 new AC locomotives with distributed power to its fleet, bringing the total to over 1,000 locomotives. Distributed power allows for remote control of the locomotives and improves braking performance, train handling and fuel efficiency, Abecassis said.

CN consumed 21.3 million more gallons of fuel in 2018 compared to 2017’s total — the increase was due to an uptick in workload and the volume of traffic. The increase was partially offset by a 3 percent fuel efficiency improvement from the previous year, according to the report.

Since 2005, BNSF has purchased more than 3,000 new locomotives, which are up to 14 percent more fuel efficient than the locomotives they replaced, Wilemon said.

KCS crews inspect and maintain locomotives according to manufacturer recommendations to maintain gaseous and particulate emissions at or below the certified EPA Tier level, according to the company’s 2018 annual report.

In some cases, fuel-saving practices and technologies paired with precision scheduled railroading drive both fuel and maintenance savings.

“One of the major benefits of scheduled railroading has been improved asset utilization and the resulting ability to reduce the active locomotive fleet through a combination of sales and placing units in reserve,” CSX’s Bowman said. “By reducing our active fleet, we save on maintenance, fuel and capital requirements. Our active locomotive count ended the year down over 300 locomotives while we grew volume and revenues.”

CP’s fuel efficiency also improved by 3 percent from 2017 to 2018, primarily as a result of running longer trains, according to the railroad’s 2018 annual report.

“Fuel efficiency is an important part of [providing optimal operational performance] because it lowers costs, reduces emissions and demonstrates the environmental advantages of rail over other transportation modes,” Bowman said. “Network fluidity and other aspects of scheduled railroading also contribute to fuel efficiency by reducing delays, increasing speeds and utilizing assets more effectively.”