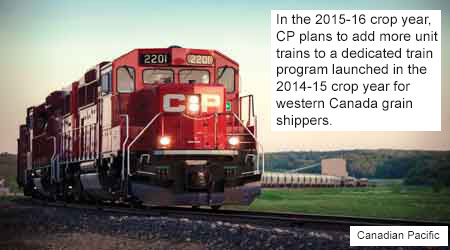 Since E. Hunter Harrison became Canadian Pacific’s chief executive officer in mid-2012, he has strived to institute measures aimed at turning around what for years had been flagging financial and operational performance.

Some examples of that handiwork include the continued pursuit of a plan to trim about 4,500 employee and/or contractor positions by 2016 through job cuts and attrition (the workforce stood at 14,128 on June 30 versus 14,960 a year earlier); the realization of a goal in 2013 to reduce intermodal transit time between Toronto and Calgary, Alberta, by 20 hours; and the recent undertaking of an initiative to expand a dedicated train program for western Canada grain shippers.

Harrison and Creel have sought to craft and implement an operating plan they believe can prompt higher productivity, greater asset utilization and lower expenses in any business environment. The operating model they continue to refine is designed to help CP adjust or optimize assets, control costs, and drive earnings and income growth regardless of fluctuations in traffic demand.

And their modeling essentially stayed true to form in the second quarter, when freight revenue slipped 2 percent to $1.6 billion (in Canadian dollars) and volume dipped 3 percent to 668,000 carloads. Despite that business downtick, CP logged its highest 2Q net income at $390 million and lowest 2Q operating ratio (OR) at 60.9 — which also now stands as its second-lowest quarterly ratio ever.

On a year-over-year basis, net income climbed 12 percent and the OR declined 4.2 points, while adjusted earnings jumped 16 percent to $2.45 per share, operating income increased 10 percent to $646 million and operating expenses decreased 8 percent to $1 billion.

“We moved trains faster, took out train miles and had fewer train starts, which lowered costs. Revenue was a little less in the quarter, but costs were a whole lot less,” says Creel.

Even in the face of a slowing economy, the commitment to provide the best service at the lowest cost is serving CP well, and figures to continue doing so, said Harrison in a press release issued July 21.

“The positive CP story is based on a business model that allows for flexibility — we are nimble, efficient and able to respond to the ever-changing economic climate,” said Harrison, who as of late August expected to soon return to his top post after spending about four weeks recovering from leg surgery and a bout of pneumonia.

‘Rome wasn’t built in a day’

The push to refine operations remains a priority to keep the story in feel-good territory. Better operational performance will help ensure resources — from employees to locomotives to facilities — are in lockstep with business demand and CP is prepped to take on more traffic when volumes bounce back, Harrison and Creel believe. In addition, the Class I needs to reach a higher level of functionality to reach the following revised 2015 financial goals: revenue growth of 2 percent to 3 percent, an OR below 62 and adjusted earnings of $10 to $10.40 per share.

“Rome wasn’t built in a day. We’re not going to change this culture in three years,” said Creel during the July earnings conference. “We’ve converted a tremendous amount, but at the same time, this is a big network. From a productivity standpoint, there are still mountains of accomplishments left to achieve in this company.”

CP so far has scaled a fair number of mountains. The railroad rid itself of most unwanted “fat” and revised service-performance levels — the typical first two stages a Harrison-led railroad goes through in a three-staged turnaround, says John Larkin, an analyst with Stifel Nicolaus & Co. Inc. Now, CP is in the midst of the third stage — increasing collaboration with customers to build traffic and drive double-digit revenue growth year in and year out — which typically takes much longer to pursue, he says.

“There is always fat in system, as with any railroad, and it took Harrison and Creel about three years to get 80 percent of the fat out. It will take five to 10 years to take out the other 20 percent,” says Larkin.

It’s helped that Harrison has permeated a “no excuses” culture at CP that differs from the previous top management’s propensity to chalk up poor operational and financial performance to various “disadvantages” besetting the railroad, he says.

“They have unleashed the power that the previous administration didn’t see,” says Larkin of Harrison and Creel, citing sustained fluidity as an example.

The culture also instills accountability for each employee, prompting every worker to think about his or her individual contribution to operations, says Ken Hoexter, an analyst with Bank of America Merrill Lynch Global Markets.

“You talk to Hunter and Keith, and see they have a vision on how there is room to go. They have put in structural changes that show this is the way it’s run,” he says.

That vision has helped push CP’s service metrics to the head of the Class I pack, says Hoexter.

“CP is the best in terms of improving velocity in the volume downturn. It’s how to keep and win customers,” he says.

CP’s volume was “less worse” than the other Class Is in 2Q, when all railroads faced a very tough business environment, says Allison Landry, an analyst at Credit Suisse Group AG. CP has attained operating leverage for when volumes return and is in the best shape at current demand levels, a position gained from what Harrison and Creel already have accomplished, she says.

“They have geared up the network, increased locomotive production and increased train lengths,” says Landry. “They are also providing some faster service, and if they provide such service, then they get paid for it. That’s Hunter’s view of the world.” 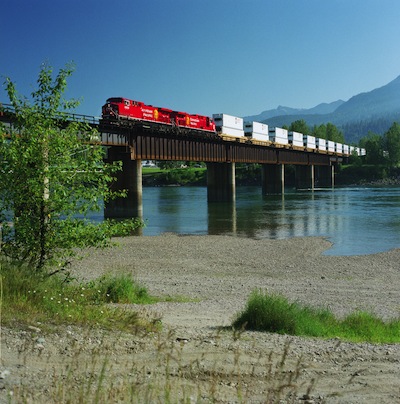 Creel recently sought to gain his own view of CP’s inner world when he paid an unexpected visit to a yard in Winnipeg, Manitoba, to observe and critique operations. He arrived on June 24 at 2 a.m. — a time yard managers and workers would least expect to be under observation, providing “a true reflection of how we’re operating,” says Creel.

He first sat in his rental car with a radio and handset and monitored activity for about an hour. Creel then went to the tower and spent 16 hours talking with supervisors, asking a lot of questions while continuing to watch workers in action. He observed “a lot of good things that were done right,” but also some tasks that weren’t performed correctly, says Creel.

“I’m proud to say I saw the best switch engine work I have ever seen at the company. The engine was ahead of the next switch and in the right position,” he says.

Avoiding a false sense of security

However, rather than switching cars, a switch crew was performing work outside their responsibilities — such as bleeding out air hoses on cars — that such highly paid crews shouldn’t be doing, says Creel. Although supervisors said no carmen were available, “they need to set the tone” to direct people where they need to be and when, he says.

“The point is ask questions about why the crew is not doing the right job. Do what’s right and not what you think is best,” says Creel. “You think people are succeeding, but actually you’re preventing people from succeeding.”

The Winnipeg yard is one of more than 30 terminals in CP’s network. After right-sizing the network, boosting train velocity and taking on other aspects of operations the past three years, 2015 has become “the year of the terminals” — as Harrison characterizes it — because those facilities are more complex and expensive to operate, says Creel.

“We need to take a deep dive on terminals, where cost shows up and need to be driven out,” he says.

Creel plans to continue visiting yards and riding on trains periodically to gauge the state of operations.

“We can’t say we’ve arrived, and we can’t get complacent. It takes more work to get back to where we were,” he says. “There can be a false sense of security about how operations are going.”

One way to continue driving productivity and efficiency in yards is by adopting remote-controlled locomotives (RCL). A conductor operates an RCL from the ground to switch cars instead of relying on an engineer in the cab, conductors and switch-crew members to perform the work.

CP is taking time to acquire and implement the technology, says Creel. The Class I plans to spend $8 million this year to install remote controls on 51 or 52 locomotives involving 111 work assignments in the network, he says. The next round of RCL implementations would occur in 2016.

“The company had tried RCL in the past and we heard things like trains had broken down. They didn’t really pursue it,” he says. “It wasn’t as productive or efficient as it could be. We want to change that.”

There’s also a change in the works that targets asset management. CP plans to add more unit trains to a dedicated train program (DTP) for the 2015-16 crop year.

Introduced to western grain shippers in the 2014-15 crop year, the DTP is designed to generate velocity in the rail portion of the region’s complex grain supply chain. About 70 percent of CP’s grain operation is covered by the program, which enables shippers to determine the origin and destination, and manage the velocity of their supply chain.

For less-than-unit-train customers who don’t qualify for the DTP, the Class I offers an open distribution program that allows shippers to order cars for four weeks in advance and place new orders as their car orders are filled.

In addition to generating operational gains from new or revamped rolling stock programs, CP aims to derive similar benefits by bolstering infrastructure. In 2015, the railroad plans to spend 21 percent of annual revenue on capital expenditures, the largest percentage among the Class Is, senior execs say.

To help increase network speed and efficiency, crews by year’s end will lengthen or improve more than 30 sidings, and upgrade several yards, such as those in St. Paul, Minn., Calgary and Coquitlam, British Columbia. The infrastructure work also figures to help CP boost business in grain, intermodal, potash and other key sectors.

All the operational improvement efforts in play company-wide should help CP hit its annual revenue growth target of $10 billion by 2018, senior execs believe. The Class I also aims to register a very-low 60s OR each year.

The railroad already has nailed a key performance target — and earlier than expected — which has helped drive operations, says Creel. Several years ago, CP set a goal of improving velocity 20 percent over a four-year period.

“So far this year, we’ve already achieved that goal and we’re accelerating the operating performance,” said Creel at the July earnings conference.

The higher average train speed has enabled CP to reduce the locomotive fleet more than 20 percent and trim headcount about 6 percent, while more resource-reduction opportunities lie ahead, he said.

“And we’re gaining momentum in the third quarter,” said Creel. “While we may have hit some unexpected business demands, macroeconomic headwinds in the short term of our multi-year plan, we’re much further along from an operating point of view, which creates powerful leverage when business demand comes back."