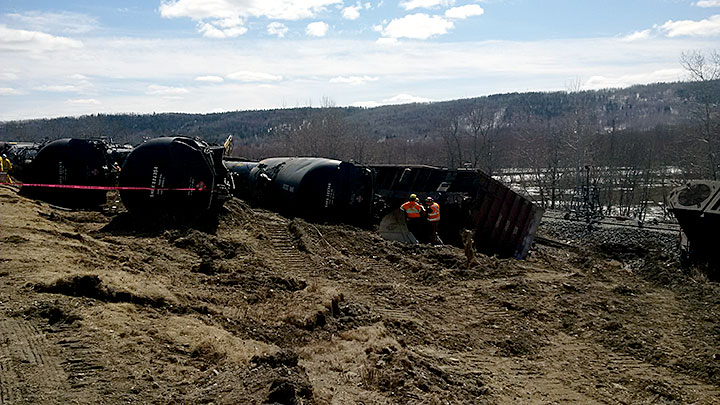 A combination of track conditions and rail wear caused a CN train to derail near Saint-Basile, New Brunswick, in 2015, the Transportation Safety Board of Canada (TSB) announced yesterday.

The westbound CN train derailed 35 cars and one locomotive on the Napadogan Subdivision on April 17, 2015. About 900 feet of main track was destroyed. Twenty of the derailed cars were residue cars that had last contained crude oil.

Investigators determined that significant wear on the rail resulted in the wheel contact shifting outward, which reduced the rail's lateral stability. Also, as the train was negotiating a curve, track conditions on the curve elevation combined to increase lateral forces on the rail, which led to the derailment, according to a TSB press release.

The investigation noted that if track gauge is close to maintenance tolerances, it is harder to protect against incremental gauge-widening forces, increasing the risk of derailments. The investigation report also highlighted the limited guidance available to track maintenance personnel faced with a combination of track conditions.

The TSB notes that there are no clear criteria for addressing combination defects that can pose a threat to safe rail operations, increasing the risk that unsafe combinations of track conditions can be missed or remain unaddressed during track inspections.

After the derailment, CN reduced the combined wear limit for 136-pound rail and began to measure gauge restraint to improve its assessments of the track structure's lateral strength, TSB officials said.

The TSB report on the derailment can be found here.