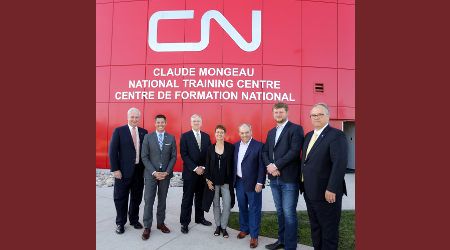 The Class I announced earlier this year that it would name its national employee training center after former President and Chief Executive Officer Claude Mongeau, who stepped down from his post for health reasons in June 2016.

Opened in 2014, the campus in Winnipeg provides consistent training with a modern curriculum for jobs including conductors, track maintainers, car mechanics and supervisors, according to CN.

Employees receive hands-on training in laboratories with equipment such as locomotive, crane, and signals and communication simulators. Also available are outdoor labs with dedicated rolling stock and other equipment for field training.

Mongeau joined CN in 1994. He served as chief financial officer for 11 years, and president and CEO for six years.