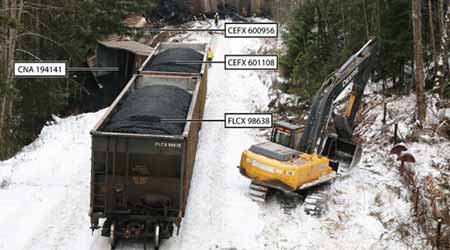 The Transportation Safety Board of Canada (TSB) has found that a broken axle on a freight car led to the January 2018 derailment of a CN train near New Hazelton, British Columbia.

The incident occurred when a CN train moving west at 29 mph experienced a train-initiated emergency brake application near New Hazelton. A subsequent inspection determined that 27 gondola cars loaded with coal derailed, with some of the product spilling into a nearby waterway.

No injuries were reported and no dangerous goods were involved. British Columbia's Ministry of Environment and Climate Change Strategy monitored the site cleanup conducted by CN, TSB officials said in a press release.

The agency, which published the findings of its investigative report last week, announced that investigators found that the 52nd car in the train had sustained a broken axle, leading to the derailment of the 27 cars. The axle broke was a result of fatigue cracking in the journal fillet radius, the area between where the wheel and wheel bearing is mounted on the axle.

While the exact cause of the fatigue cracking could not be determined, fatigue cracks are known to result from abnormal cyclic loading due to a number of reasons, such as a wheel tread defect, a general out-of-roundness, or uneven loading from rail-car truck components.

More investigation information is available on the agency's website.