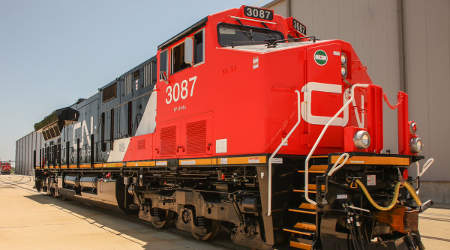 CN will purchase another 60 GE Transportation locomotives, expanding the Class I's 200-unit order placed in December 2017, the Class I and GE announced today.

All the CN locomotives will be produced at GE's plant in Fort Worth, Texas. The new purchase includes a multiyear service agreement.

"With strong demand across our business, we continue to invest for the long haul with these locomotives that further expand the reliability and size of our fleet," said CN President and Chief Executive Officer JJ Ruest in a press release. "With expanded infrastructure and new equipment, we are giving our industry-leading transportation team the tools they need to provide higher levels of service with greater operating efficiency."

"Our Tier 4 technology will further increase CN's productivity and reliability and help them grow in the resurging North American segment," said Rafael Santana, president and CEO of GE Transportation.

CN and the industry are experiencing traffic growth this year, with North American rail volume up 3.5 percent so far this year, according to the Association of American Railroads.