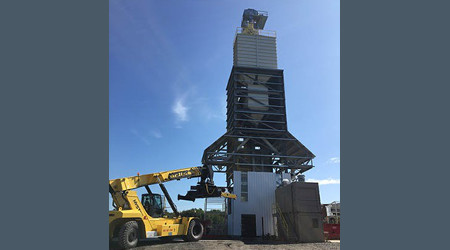 The new facility is located on Ridley Island, next to the recently expanded Port of Prince Rupert Fairview Container Terminal and connected to CN's network.

The train transported canola meal pellets from western Canada. The new facility, which opened Aug. 31, is the only unit train stuffing facility on Canada's West Coast, helping crops transported by CN from western and central Canada and the U.S. Midwest to reach international markets, CN officials said in a press release.

The 10-acre facility includes a 100-car rail loop corridor, a grain dumper pit and a state-of-the-art conveyance system. It will transload grain and processed grain products from CN hoppers to ocean liner containers for export.

"We recognize the importance of making Canadian grain competitive on the global market," said Doug MacDonald, CN vice president of bulk. "As such we are pleased to play a role in innovative supply chain partnerships such as this one that will benefit the grain industry."