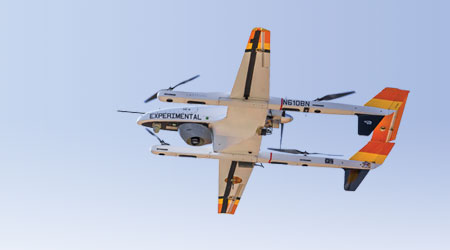 Nearly 140,000 miles of rail network and over 61,000 Class I bridges are manually inspected for defects and structural integrity in the United States, according to the Association of American Railroads.

With an extensive network of main tracks and sidings inspected weekly and bridges inspected yearly — or more often as determined by the Federal Railroad Administration’s track and bridge safety standards — railroads have been slowly adopting and testing drone technology to supplement their inspection efforts since around 2015.

Unmanned Aerial Vehicles (UAVs), commonly known as drones, are aircraft with no pilot onboard and controlled by either an operator on the ground or autonomously. Equipped with cameras and sensors, drones can be used to collect images, video, LiDAR surveys and other data. 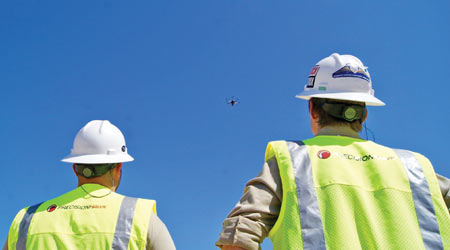 In standard line-of-sight operations, a drone pilot operates a UAV from the ground with full view of the aircraft.
PrecisionHawk

“The fidelity of data we’re getting off the drones is unbelievable,” says Ed Hine, vice president of operations at PrecisionHawk, a drone-based solution provider. “We have the ability to take in a massive amount of information from flying over or around the rail [infrastructure] and analyze imagery with a ton of information behind it.”

From better vantage points to high-quality imaging linked to precise GPS locations, drones can help railroads obtain data that can be dangerous, expensive or inefficient to obtain frequently with traditional inspection methods.

“The human element is not always 100 percent accurate,” says Zach Garner, president of VisioStack, a drone imagery data management company. “There is a potential for accuracy gain [with a drone]. There is a potential to reach places that cannot be reached very easily.”

Oftentimes, traditional inspection methods require railroad personnel to be physically in the right of way, spending time on the track to find, record and diagnose issues. By using drones to supplement these inspections, the amount of time workers need to be on the track decreases, boosting safety, Hine says.

Drone technology also can increase overall efficiency because flying over and around a bridge or track doesn’t require operational interruptions.

“We’ll position [a drone with video capabilities] when we know a train is coming and there’s certain elements of the bridge, like pins or bearings, that we want to see under load,” Youschak says.

Because of the advantages, more railroads are using drones to inspect bridges and track.

Applications in the field 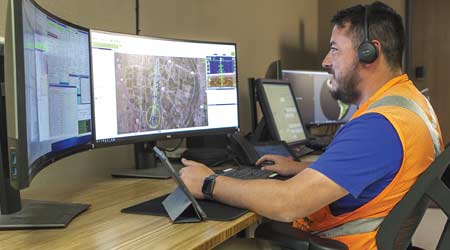 BNSF Railway Co. tests and utilizes fully autonomous drones in a beyond-line-of-sight operation. In this type of application drones are monitored remotely.
BNSF

The Class I operates drones in long-range flights called beyond visual line of sight (BVLOS). In standard line-of-sight operations, a drone pilot operates a drone from the ground with full view of the aircraft. In BVLOS, the aircraft is programmed with flight plans and launched, then it follows the flight plan autonomously and out of view of an operator who remotely monitors its status. The drone is collected at the end of its flight when data is usually extracted.

By 2016, BNSF had launched its first BVLOS flight on a 132-mile stretch of track in New Mexico. Now, the Class I is using this technology and evaluating its “best use case,” BNSF Telecommunications Director Todd Graetz said in an email.

Other Class Is certify employees as drone pilots for line-of-sight operations to supplement their track and/or bridge inspections by capturing images in hard-to-reach areas or surveying track after a weather event or derailment.

As of October 2018, Norfolk Southern Railway had eight FAA-certified drone pilots on staff who operate them for track slope inspections, supplemental bridge inspections, aerial surveys and derailments, according to NS Assistant Chief Engineer of Design and Construction Alan Johnson.

“Norfolk Southern has used drones to inspect the track at several derailment sites to determine the length of track that was affected before rail cars were removed from the site,” Johnson said in an email. “With information obtained from the drone flights, NS has been able to accurately determine the number of track panels needed to replace the damaged track segments in the derailments.”

Drones enable railroad personnel to safely and efficiently observe areas that may not be accessible otherwise during emergency situations, Johnson said.

In 2016, Union Pacific Railroad used a live feed from one of its drones to survey track during flooding in northern Iowa. The images collected from the drone allowed more accurate resource allocation and a more effective recovery plan, according to UP UAS Director Robert Meder in a 2017 article on the Class I’s InsideTrack blog. The MOW team ended up adding more ballast to the flood-affected track and sent resources via a less-flooded rail route.

UP uses drones to inspect bridges and for “investigative purposes,” said Raquel Espinoza, UP’s senior director of media relations, in an email. 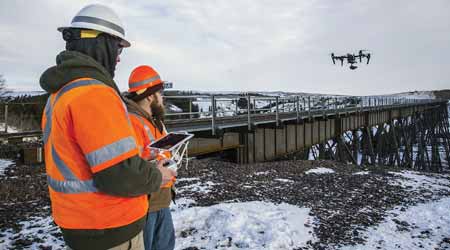 Smaller rotorcraft drones equipped with sensors and cameras are used to maneuver through and around rail bridges to provide engineers rare vantage points and supplement inspections.
BNSF

The operating suites, called AMROS and Perceptive Navigation, also are able to precisely localize the drone’s position relative to a bridge, Singer said.

This enables the team to collect “high-value actionable data, keep track of precisely where this data was collected and monitor these locations on the bridge over time, getting the same image from the same position/same angle over and over again,” he added.

While railroads appear ready to embrace drone use in their operations, the technology has far from reached its potential in the industry, suppliers say.

“It’s still in the early stages for sure,” PrecisionHawk’s Hine says. “[There are] a lot of efficiencies I think the railroads could use.”

As the FAA continues to build its framework for commercial drone usage, and the drone industry itself makes technology advancements, perhaps drones have the potential to start replacing traditional day-to-day foot inspection requirements, VisioStack’s Garner says.

For that to happen, Garner says there would need to be advances in drone hardware, data analytics and processing, machine-learning, deep-learning and artificial intelligence.