Late last year, Watco Cos. LLC completed a rebranding campaign that shortened the short line holding company’s formal name to “Watco.” The effort also resulted in the adoption of a new slogan: Discover the difference at Watco.

Although the campaign involved some changes, the overriding mission remains the same for the 38-year-old company, which as of late May owned 45 short lines operating in 26 states and maintained two rail operations in Australia. Ever since Watco was founded in 1983 — starting with a single industrial rail-car switching operation in DeRidder, Louisiana — the company has strived to acquire more railroads, purchase or lease more trackage, and establish and enhance more logistical services.

That growth pursuit has always focused on customers to better understand their needs and learn about new opportunities, says Watco Chief Executive Officer Dan Smith. Discussions can lead to referrals and potential new business, as well as stronger bonds with shippers, he believes.

“Conversations and relationships beat a strategy every time. We try to listen more than we speak,” says Smith.

“We strive to satisfy customers’ needs, and we have a strong willingness and desire to say, ‘Yes,’” he says. “Introductions and relationships start with humble beginnings, and they can lead to large transactions.”

Watco aims to go quite large because by 2021’s end, the company expects to own and operate at least 50 short lines. Providing more logistics options is a big goal, too.

Smith — who from 1999 to 2003 pitched for the Boston Red Sox, Montreal Expos and Texas Rangers — felt insecure each day as a major league reliever. So he wants his point persons to be secure in the knowledge that they work hard with customers every day to find opportunities that lead to value creation for Watco.

“We need to continue to find ways to grow, and we need to differentiate ourselves,” says Smith.

One way to do that is through new and improved environmental, social and governance (ESG) initiatives since many customers are stressing sustainability and better stewardship.

“We want to be part of the ESG story before someone writes that story for us,” says Smith.

The “Discover the difference” slogan is built off the company’s synergies with shippers and customer-first principles, and extols the maturation and extension of those principles, says Watco EVP and Chief Commercial Officer Stefan Loeb.

Instead, a box can be designed around a certain customer or business requirement. Watco’s thriving third-party logistics business was launched that way, says Loeb, who in 2015 was named a Rising Star by Progressive Railroading as someone who made a major contribution to his organization or the rail industry. 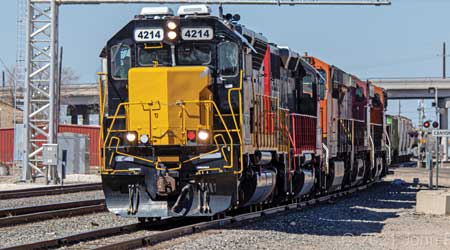 In 2015, Watco launched the 121-mile Lubbock & Western Railway, which interchanges with BNSF and UP in Lubbock, Texas.
Watco/John Fisher

Although the number of short lines owned by Watco has doubled since he joined the company in 2010, landing additional customers is hard, Loeb admits.

That’s why Watco has sought to become a terminal expert to attract shippers with that expertise, and now operates 88 terminals compared with just 10 in 2010. The terminals handle transloading, warehousing and outdoor storage activities; bulk, breakbulk, containerized and liquid products; and bag, crush, blend, mix, bundle or wrap processes.

“Now, we handle so many commodities, it’s mind-boggling,” says Loeb. “I recently had conversations with customers about cashews and fireworks. Who would have thought we would talk about handling things like that?”

The challenge is to convert as many opportunities into wins as possible, says Coomes.

“There’s always a pipeline of opportunities out there, and we always have an eye open for them. We need to leverage our abilities and show what we can do for customers,” he says. “They can look at our strong track record of deals and services.”

Bagging a big one

Since Watco’s first business was industrial plant switching, the company knows that service well, says Loeb. Watco now pre-blocks cars for Class I interchanges and moves cars as part of the plastic production process for Dow.

“We unlocked capacity for them by operating the rail service better,” says Loeb. “While we were bidding on it, we tried to make it clear to Dow that we understood what they are doing at the plants.”

Watco has swung some big deals in 2021, too. In March, the company reached an agreement with CN to buy about 250 miles of track between Sault Ste. Marie and Oba, Ontario, and about 650 miles of branch lines in Wisconsin and Michigan.

The sale — which requires Surface Transportation Board approval for the U.S. trackage — also involves the Algoma Central Railway and the Agawa Canyon Train Tour. Watco officials signed a memorandum of understanding with the Missanabie Cree First Nation regarding partnership opportunities for the Algoma Central.

Although the Dow purchase was the company’s largest deal by dollar value, the CN acquisition also stands as one of Watco’s biggest transactions, Smith says.

“It’s a significant footprint. We felt there are good growth opportunities and a lot of potential in those assets,” he says.

Moreover, Watco is familiar with railroading in Wisconsin since it’s operated the nearly 600-mile Wisconsin & Southern Railroad since 2012.

“We know the customers and the area, so there are synergies,” says Loeb.

Another key 2021 transaction occurred in February, when the South Dakota Department of Transportation (SDDOT) finalized the sale of a Mitchell-to-Rapid City rail line to Watco for $13 million. Watco formed the Ringneck and Western Railroad LLC to assume operation of the line from the Dakota Southern Railway and agreed to work with the SDDOT to complete the construction of a siding near Kimball.

At May’s end, Watco expected to finish claiming ownership of the trackage, transitioning out the former line operator and launching the Ringneck and Western.

May also marked the launch of a full-service rail, storage and transloading facility near Refugio, Texas, to support a growing industrial area for bulk, chemical, oil and gas, wind energy, agriculture and steel products.

The 222-acre terminal is served by BNSF Railway Co. and Union Pacific Railroad, and features 650 existing rail-car spaces. Watco plans to expand the terminal to accommodate additional car storage space or a storage in transit yard. 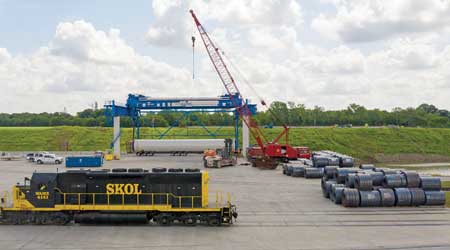 Watco operates marine and wind energy terminals at the Tulsa Port of Catoosa in Oklahoma, both of which are served by its South Kansas & Oklahoma Railroad.
Watco

As Watco continues to add facilities, services and short lines to its offerings, there are nuances that can impact overall operations, says Coomes. For example, each new short line presents its own unique challenges that need to be navigated, perhaps because of the structure of the previous ownership. Watco might be dealing with a new short line in Illinois that moves a lot of grain or operates in an industrial area, or one that moves high volumes in close quarters.

“We rely on our entrepreneurial nature, nimbleness and experience as we start a new short line,” says Coomes. “We have had many opportunities to acquire short lines, so we’ve had lots of repetitions to hone our craft.”

Watco treats each short line as its own self-functioning business, and provides centralized support and services.

“We prescribe to a humble servant leadership mentality,” says Coomes.

Another continuing challenge with constant growth: human resources. Watco’s workforce has grown from 800 to about 5,000 over the past 15 years.

“We’re now competing with other railroads and businesses for what’s available. Many people decided not to work for now and are staying home, so the pool is smaller,” she says.

That’s meant Watco has needed to be more creative in its recruiting efforts. One thing that’s helped is a greater emphasis on social media, such as Facebook, Twitter and Instagram.

“We need to have a presence where people are at, to tell our story why they should apply here, says Peterson, who was named one of Progressive Railroading’s Rising Stars in 2014.

Existing workers also are incentivized to get the word out among family and friends about Watco jobs to serve as an additional recruiter.

“It’s fun to be part of our growth. The only way to meet customers’ needs is with people,” says Peterson.

In addition, Watco tries to better vet people to ensure they fit a team instead of a job’s technical aspects, which has helped improve retention. The company provides “day in the life” videos on its website that provide a detailed overview of a job, including non-rail positions such as mechanical services.

“It’s been difficult to fill logistics positions because many people don’t understand what it means to broker loads. The videos help people understand positions,” says Peterson.

To spur more growth, the management team spends a lot of time trying to determine how to use the company’s resources and capital to get into new areas, says Loeb.

“We like to say there are no borders in our opportunities — we don’t care where the opportunities are, we keep our options open,” he says. “We have the expertise, experience and capital to show people who sell assets, to show how we can unlock value if they work with us.”

There are lots of arrows in Watco’s quiver, which means there are many things to talk about with customers, says Smith.

“We love when a terminal has connectivity to a short line,” he says. “It gives us an opportunity to talk about what comes next. That’s in our DNA.”

Ultimately, Watco’s overall objective isn’t to operate railroads in all 50 states or to be the biggest short-line holding company in North America.

“We do more than operate short lines — we’re not just a holding company,” says Loeb. “We see ourselves as a logistics solutions provider.”