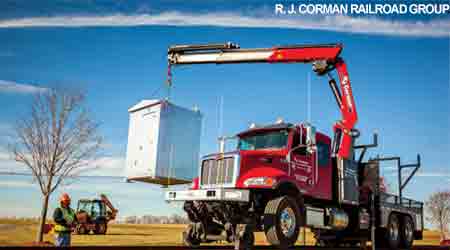 To an extent, the service is an outcropping of the just-in-time delivery evolution in the logistics realm, and some C&S suppliers have been offering turnkey solutions for more than two decades.

For others, the fast delivery of prepackaged material is a service need that became acutely apparent during the past decade, particularly following devastating weather events — notably Hurricane Katrina in 2005.

And for some suppliers, providing prepackaged signal material is simply a natural evolution of their core business, particularly as positive train control (PTC) continues to alter the C&S technology landscape.

For the past two decades, a desire by signal equipment producers to reduce manufacturing costs and the challenge of forecasting demand has driven up lead times for core signal equipment “to incredible levels,” says Corman’s Wilson.

In the past, core signal equipment — such as the crossing and interlocking control variety — was considered “shelf stock” that manufacturers produced to replenish minimum inventory levels. But when market demand lagged inventory levels by a matter of months, the entire supply chain was pressured.

“Today, even though equipment is modular and flexible, it is still built to order,” Wilson says.

That can be a problem after a hurricane, when a railroad experiences a washout and needs signal materials ASAP. The evolution of PTC, which heightened demand for certain control systems, also forced suppliers to think about how they’d fill orders in a timely fashion.

Enter the concept of prepackaged signal material, which can eliminate lag times required to build and wire assemblies.

“It forces you to really have to put a lot of thought into how things are configured,” he adds.

“With our regional reach of our material sales and emergency services companies, and working in lock-step with our track construction company, we can stage/store pre-configured packaged signal assemblies to be delivered to a work site within hours,” says Wilson.

The company also can place engineers and support staff “right on the job site” by outfitting mobile command centers with “the tools and equipment needed to run every facet of a signaling operation,” he adds.

“We deliver projects in containers or on flatbeds,” Siemens’ Hall says. “If a Class I orders a crossing or a wayside house, we put the entire thing together, prewire it, containerize all the pieces and ship it to where they need it. It’s a core business for us.”

And it’s a business that, for Siemens, dates back to the early to mid-1990s.

“We started doing it to help facilitate delivery material so it was all in one place,” Hall says. “It just made it easier for our customers.”

Since the mid-1990s, the company also has offered what Hall terms an “emergency knock down” service.

“We can respond quickly and have everything in one place and [shipped] in a container,” he says. “They don’t have to look through all their storage depots and across their networks for parts.”

“Generally, we will have what they need within 24 to 48 hours,” Hall says. “The emergency service is also a core business for us. Customers see value in it, as well.”