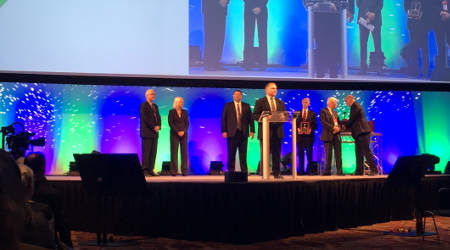 The presentation was held during the opening general session of Railway Interchange 2017, which is underway in Indianapolis.

The award is named after the late William Walter Hay, a longtime association contributor who was a rail design, construction and operations consultant and who served as a professor of railway civil engineering at the University of Illinois Urbana-Champaign. AREMA bestows the honor to recognize outstanding rail engineering projects that foster innovation, improve safety or enhance service performance reliability. This year, the association considered three submissions for the honor, said Mike Franke, Amtrak's senior director of state government contracts who chairs the Hay award committee.

The committee chose the joint BNSF/WSDOT project because the effort to improve passenger-rail service and reliability on the Class I's lines in Washington employed an innovative approach to coordination and collaboration among several partners, said Franke during the presentation. Characterized as a massive undertaking by both BNSF and WSDOT officials who joined the presentation, the project involved building a third mainline, completing many track improvements and making many changes to service plans.

The work was completed over five years between Vancouver, Washington, and the U.S.-Canada border in Blaine, Washington. The state used part of $800 million it received through the American Recovery and Reinvestment Act of 2009 to pay for the project and the  monies were administered through the Federal Railroad Administration.

Also during the opening general session, AREMA President David Becker announced Franke has been chosen as an honorary member of the association for his many years of service, including 16 years as treasurer. His contributions have been invaluable to the organization, said Becker, Norfolk Southern Railway's chief engineer of design and construction.

In addition, Becker announced that AREMA will unveil a new logo and launch a redesigned website next month as part of an effort to commemorate the association's 20th anniversary. AREMA was formed on Oct. 1, 1997.