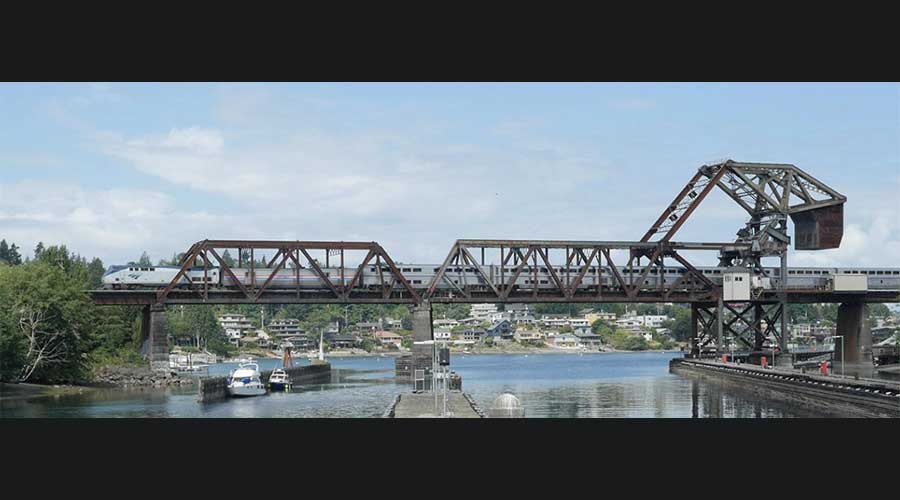 A $25 million grant from the federal Infrastructure for Rebuilding America (INFRA) program has been awarded to help fund the Salmon Bay Bridge project in western Washington.

Owned by BNSF Railway Co., the 108-year-old bridge is an integral rail link along which 30 to 40 freight, commuter and intercity passenger trains cross each day. The INFRA funds will be used to replace the drawbridge's mechanical system, extending the structure's operational life by decades.

BNSF will provide an additional $70 million in funding to complete the project.

"The Salmon Bay Bridge is a critical piece of freight and passenger transportation infrastructure that is at risk of failure," said U.S. Sen. Maria Cantwell (D-Wash.) in a press release. Cantwell wrote to U.S. Transportation Secretary Pete Buttigieg in support of the grant application for the project's INFRA funding.

"More than 30 trains and 100 vessels each day depend on this bridge to get freight and commuters where they need to go," Cantwell said. "These funds will ensure that one of Seattle’s most iconic bridges remains operational for another 50 years.”

Opened in 1914, the bridge is the only direct north-south route to serve northern Seattle, northwestern Washington and Canada. Amtrak and the Washington State Department of Transportation will use the bridge for the Amtrak Cascades trains when that service — which is slated to return later this month after a two-year suspension — is restored. Cantwell recently urged Amtrak's board of director nominees to commit to resuming service on this critical route.