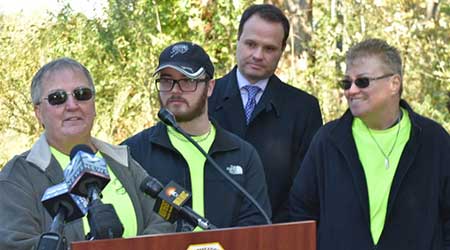 The Massachusetts Department of Transportation (MassDOT) will provide $700,000 to help Amtrak make safety improvements at a hazardous grade crossing in western Massachusetts.

Amtrak, which owns the line and is carrying out the project, will fund the remaining costs, Amtrak officials said in a press release.

Workers will install a new gate, warning lights and a power system to the crossing at Birnie Road in Longmeadow, where five people have been killed in accidents since 1975. The safety improvement project is expected to begin in 2019.

“The improvements that are being funded in part by MassDOT will help prevent vehicles from traveling over the railroad crossing as trains are approaching this location,” said MassDOT Rail and Transit Administrator Astrid Glynn.

MassDOT has worked with federal, state and local leaders and members of the public in recent months after receiving feedback regarding the need for improvements and safety upgrades at the Birnie Road crossing, department officials said.

“Safety is Amtrak’s top priority, and the joint investment of MassDOT and Amtrak at Birnie Road in Longmeadow shows that both parties are equally committed and dedicated to safety,” said Tom Moritz, Amtrak’s assistant vice president of infrastructure access and investment.

The family of a man killed at the crossing last year helped bring attention to the need for safety improvements at the crossing, according to a press release issued by Massachusetts State Senator Eric Lesser.

Warren Cowles, a Longmeadow Department of Public Works foreman, was killed in March 2017 when a train struck the snowplow he was operating to clear the tracks during a snowstorm.