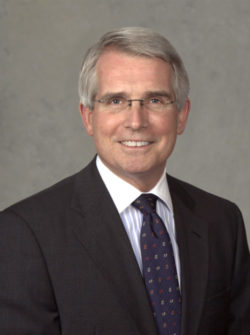 He will succeed Joseph Boardman, who announced earlier this year that he would retire in September.

"We are very pleased that someone with Wick’s experience and vision will lead Amtrak during this critical period as the company charts a course for future growth and improvement," said Amtrak Chairman Anthony Coscia in a press release.

Board members believe that Moorman will build on the success that Amtrak achieved during Boardman's eight-year tenure by launching initiatives to further enhance safety and customer service, modernize operations and guide the implementation of FAST Act requirements.

Moorman considers it an "honor and privilege” to assume Amtrak’s leadership role, he said in a statement.

"I look forward to working with its dedicated employees to find ways to provide even better service to our passengers and the nation,” he said. “At Norfolk Southern, our team fostered change by placing a solid emphasis on performance across all aspects of our business which helped develop a stronger safety and service culture throughout the company. I look forward to advancing those same goals at Amtrak and helping to build a plan for future growth.”

A native of Hattiesburg, Miss., Moorman served NS for more than 40 years, rising from management trainee to CEO and chairman. In 2013, Moorman received Progressive Railroading's "Railroad Innovator Award" in recognition of his achievements in the rail industry. A profile of him can be read here.

"Wick Moorman is a proven railroader whose track record of success demonstrates his commitment and adherence to rail safety, efficiency and service to customers. His contributions and leadership in the freight rail industry, I believe, will advance the working partnership the freight railroads have with Amtrak," said AAR President and CEO Ed Hamberger.

The Southern Rail Commission also praised Moorman's selection as the next Amtrak CEO.

"His appointment extends a long tradition of presidents with a track record of supporting a national, holistic passenger rail network that includes the booming northeast corridor, state-supported routes and critical long distance service," said commission Chairman Greg White. "As the group responsible for the development and expansion of passenger rail in Mississippi, Alabama and Louisiana, the Southern Rail Commission is also proud to see a native Mississippian take the helm of our nation’s passenger rail system."