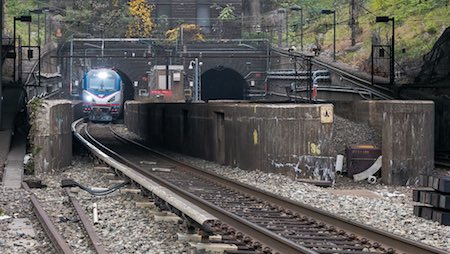 President Trump's administration has cast doubt on the amount of federal funding available for the proposed construction of a new Hudson River railroad tunnel that connects New York and New Jersey.

In a letter obtained by Crain's New York Business, Federal Transit Administration Deputy Administrator K. Jane Williams informed New York and New Jersey officials late last week that a "50/50" agreement between the U.S. Department of Transportation (USDOT) and the two states to share the cost for the proposed "Gateway" tunnel project is "non-existent."

"There is no such agreement," Williams wrote. "We consider it unhelpful to reference a non-existent agreement rather than directly address the responsibility for funding a local project where nine out of 10 passengers are local transit riders."

A proposal in which the federal government would pay for half of a "mega project" would be more than existing precedent for federal support of other mega projects, she added. Moreover, the amount the project proposed to receive in federal Capital Investment Grants "lacks recognition of the impact that such funding would have on the availability of funds for the remainder of the country."

Williams' letter appears to erase a 2015 deal made between President Obama's administration and New York and New Jersey state officials in which the states would share half the cost of the proposed project and the federal government would cover the other half.

In response to Williams' letter, New York State Budget Director Robert Mujica Jr. wrote that the Gateway tunnel project is "critical to the long-term vitality of the entire Northeast region and, as a result of significant damage caused by Hurricane Sandy in 2012, is now considered the nation's most urgent major infrastructure project."

The states, in partnership with the Port Authority of New York and New Jersey, in December announced details to fund all of their local share of the Gateway tunnel, Mujica noted.

Not only did the federal government "publicly" announce its 50 percent commitment in 2015, but the 50-50 framework was discussed at an August 2017 meeting at the White House between the New York and New Jersey governors, President Trump and Transportation Secretary Elaine Chao, according to Mujica's letter.

Mujica also disputed Williams' contention that the states' and port authority's use of federal loan programs to pay for their half of the infrastructure project would result in "federal dependency."

"The fact that these funding commitments would utilize federal loan programs should in no way be misinterpreted as 'federal assistance' or 'federal dependency.' Doing so would go against decades of precedent when it comes to funding infrastructure projects of this scale and importance," Mujica's letter stated. "The people of the bi-stated region are paying for the commitment and the very economy of the Northeast depends on it."