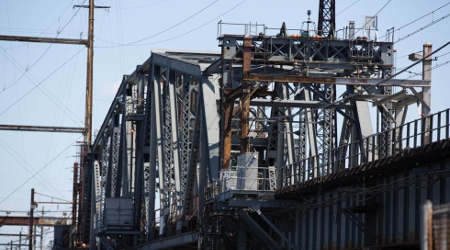 The Federal Transit Administration (FTA) has issued a record of decision for a project to replace Amtrak's Portal Bridge in New Jersey.

The document formally adopts the Federal Railroad Administration's (FRA) environmental impact statement for the project, which involves replacing a century-old swing bridge over the Hackensack River in New Jersey with a high-level fixed bridge.

The replacement plan is in the project development phase of the FTA's Capital Investment Grants (CIG) program. Amtrak, New Jersey Transit and the Port Authority of New York and New Jersey are seeking $811 million in CIG funding toward the $1.64 billion total cost.

The record of decision is part of the environmental review process required by law for projects seeking federal funding through the CIG program, FTA officials said in a press release.

However, additional steps are necessary before the FTA can make a determination about CIG funding for the Portal Bridge project.

Built by the Pennsylvania Railroad in 1907, the bridge accommodates Amtrak and NJ Transit trains that serve more than 200,000 weekday passengers.

In May, NJ Transit's board approved an early action contract for work to support the Portal Bridge replacement project.