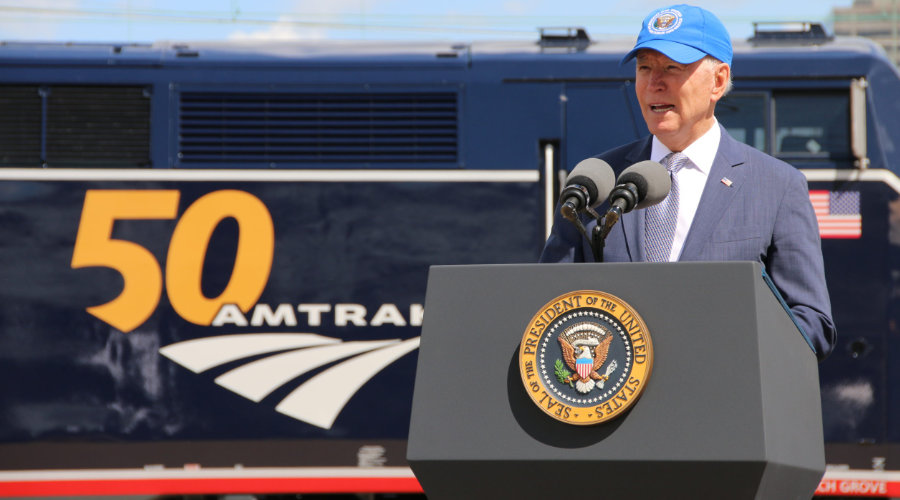 President Joe Biden last week joined Amtrak executives for a 50th anniversary ceremony to pay homage to the past and share Amtrak’s vision for the future.

Held at the Gray 30th Street Station in Philadelphia, the ceremony highlighted the contributions of Amtrak employees past and present as well as the railroad’s plans to expand and improve rail service for the future.

The nation now has a “once in a generation opportunity to position Amtrak, and rail, and intercity rail, as well in general to play a central role in our transformation of transportation and economic future,” the president said at the event, which was streamed live.

“America needs a rail network that offers frequent, reliable, sustainable and equitable train service. Amtrak has the vision and expertise to deliver it, now we need Congress to provide the funding for the next 50 years,” said Amtrak Chief Executive Officer Bill Flynn during the ceremony.

Over the next 15 years, Amtrak’s vision for expansion aims to connect up to 160 communities throughout the United States by building new or improved rail corridors in over 25 states. The plan calls for the railroad to introduce new stations in more than half the states, increase rail service to 47 of the top 50 metropolitan areas and create over half a million new, well-paying jobs.

“Unfortunately, some host railroads frequently fail to meet this requirement and ‘freight train interference’ is the largest source of delay to Amtrak trains on host railroads, violating the law and inconveniencing passengers,” said Amtrak CEO Flynn said in a press release.

The Rail Passenger Fairness Act would improve on-time service for Amtrak riders by better enforcing legal protections for passengers’ right to the rails, said Blumenthal. The bill would ensure that Amtrak could sue freight railroads that continue to violate the law.