Amtrak on Monday said that its on-time performance (OTP) should be measured by taking into account arrival times at both intermediate stations and at endpoints.

The national passenger railroad's comments came in response to the Surface Transportation Board's proposed rulemaking late last year that would evaluate on-time performance by a train's arrival only at route endpoints.

However, measuring performance in this way "results in an incomplete, and in some cases distorted, picture of actual performance, significantly because it fails to take into account the experience of almost two-thirds of Amtrak passengers," Amtrak officials said in response to the STB's proposal.

Additionally, gauging OTP only by arrival at endpoints leaves performance within 24 states unmeasured altogether because they have intermediate stations but no endpoint stations. It also doesn't address the routes where performance appears to be above 80 percent but is significantly less at stations along the way, Amtrak officials said. 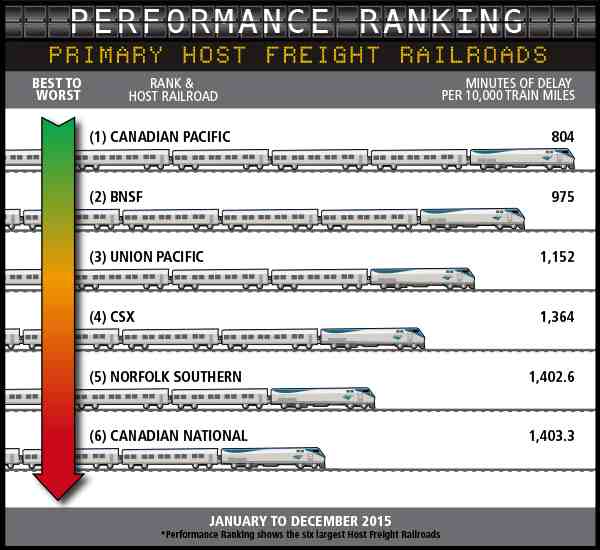 Both Congress and the Interstate Commerce Commission have recognized that measuring performance at all stations provides a "fuller and more accurate picture of performance," Amtrak said.

As a result, the railroad urged the STB to adopt "All-Stations OTP" for purposes of triggering an investigation of a host freight railroad under the Passenger Rail Investment and Improvement Act of 2008. This law mandates that the STB initiate an investigation if Amtrak files a complaint stating that the OTP of an intercity passenger train has fallen below 80 percent for two consecutive quarters.