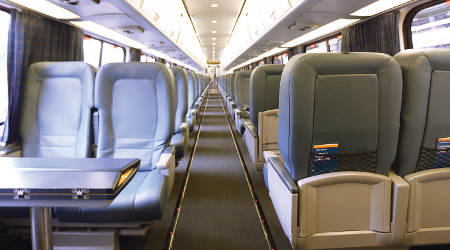 Amtrak last week announced a $4 million plan to update the interiors of the entire Acela Express fleet operating on the Northeast Corridor (NEC).

The 14-month program will rehab the interiors of 20 trainsets, which include 100 Amtrak cars.

Workers will install new cushions and covers for business class and first-class seats, as well as new carpet for the aisle runner. Crews also will perform a deep clean of the interiors, Amtrak officials said in a press release.

The refresh will occur ahead of the debut of next-generation Acela trains. The first trainset prototype is expected to be ready for testing in 2019 and enter revenue service in early 2021.

All trainsets in the current fleet will be retired in early 2022.

In August 2016, Amtrak received a $2.5 billion federal loan to cover the cost of the 28 new trains, which are being built by Alstom.

Meanwhile, Amtrak has announced that it's expecting heavy ridership this summer. Over the coming Memorial Day week, the national passenger intercity railroad expects more than 320,000 people to ride Amtrak trains.

During previous Memorial Day weeks, the Northeast Regional, Acela Express and Pacific Surfliner routes have been the most popular, Amtrak officials said.