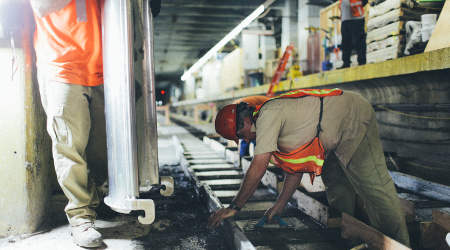 The study is part of Amtrak's work to improve the rider experience at Penn Station, which Amtrak owns. The review will examine the interaction, coordination and collaboration between the passenger railroads that use the station, considered the busiest passenger-rail hub in the United States.

This summer, Amtrak has been working on a fast-tracked infrastructure renewal project at Penn Station, following two derailments earlier this year. In addition to making the repairs, Amtrak officials have promised to address other concerns at the station.

"We have made significant progress in renewing rail infrastructure at Penn Station and are now taking steps to improve the passenger areas," said Amtrak co-Chief Executive Officer Wick Moorman in a press release. "We have assembled a top-notch team of national and international experts to work with the railroads on delivering solutions that will greatly improve the passenger experience at New York Penn Station."

Per agreements with Amtrak, MTA Long Island Rail Road (LIRR) and New Jersey Transit each manage their respective concourses at the station. AECOM and Network Rail will review those relationships and develop recommendations for improvement, Amtrak officials said.

Amtrak has convened a working group of Amtrak, LIRR and NJ Transit professionals to support the study, they added.

The AECOM-Network Rail team will review management of daily operations in the three concourses, including during service disruptions. The consultants also will look for ways to strengthen coordination between all railroads to improve the passenger experience, safety and security.

The consultants will develop a passenger concourse improvement plan, which will include guidance on operations and maintenance partnerships, as well as on Amtrak's planned redevelopment of Penn Station in partnership with the private sector.

AECOM and Network Rail will begin their work immediately. Their recommendations are expected to be delivered in early 2018, after which Amtrak, LIRR and NJ Transit will determine the next steps for implementation.