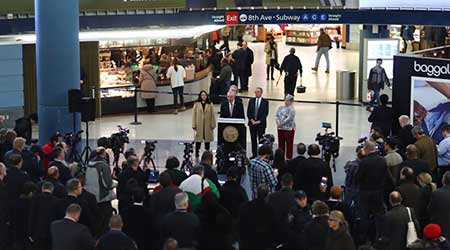 Amtrak and New Jersey Transit officials yesterday announced they've reached a financial settlement that will pave the way for funding ongoing and future improvements to rail infrastructure into and out of New York City.

And as part of the agreement announced yesterday, NJ Transit also will pay Amtrak $7 million a month for capital improvements, according to Bloomberg.

"This agreement represents a clean slate and a new era in our relationship with Amtrak," said Corbett in a press release. "In addition to continued infrastructure improvements and enhancing safety, this significant investment and strengthened partnership allows long-stalled major capital projects along the Northeast Corridor like County Yard and the Elizabeth Station Reconstruction project to advance."

NJ Transit also will have more input in prioritizing and coordinating projects that will directly affect the passenger experience, Corbett said.

Amtrak and NJ Transit jointly agreed to reinvest all funds that came from this and other agreements into existing and future joint Northeast Corridor infrastructure projects that benefit both organizations. That includes the Portal Bridge, as both organizations also highlighted that they are ready to begin full construction on Portal North as soon as federal funding is secured, officials said.

In addition, Amtrak and NJ Transit announced their plan for joint facility improvements, including the redesign of the Main/Eighth Avenue Concourse At New York Penn Station, following the relocation of major passenger-facing facilities to Moynihan Train Hall in 2021.

Murphy, who late last year signed a bill aimed at overhauling NJ Transit, said this latest agreement will help NJ Transit on its road to recovery.

"After eight years of disinvestment in, and mismanagement of NJ Transit, collaborative partnerships like the one we are announcing today will go a long way to restoring the agency to its former preeminence," Murphy said in a press release issued after the press conference.