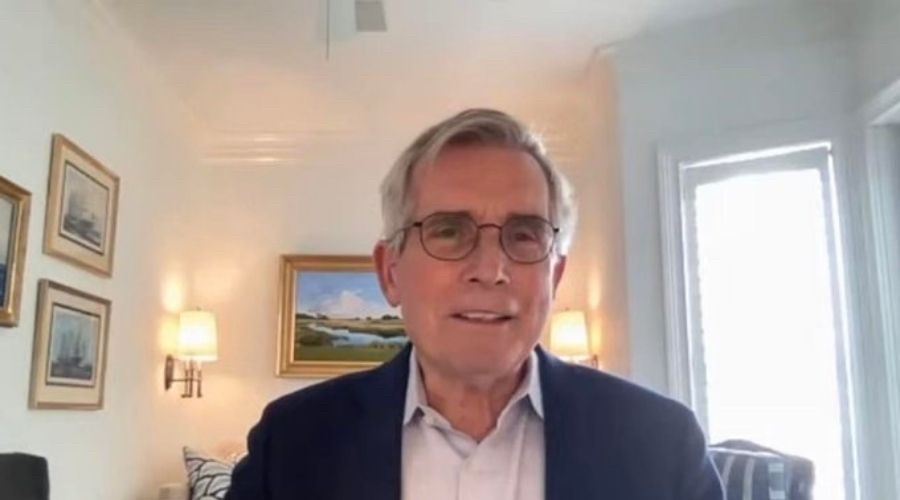 Track-sharing agreements between Class Is and Amtrak can benefit both sides if the parties involved are open to transparency and collaboration, the former president and CEO of Norfolk Southern Railway (NS) and Amtrak told the Surface Transportation Board (STB) yesterday.

During the second day of a two-day public hearing on Amtrak's application to relaunch Gulf Coast service, the STB heard from Charles "Wick" Moorman, who served as NS president and CEO from 2005 to 2015, then a year later took what would be a 16-month stint as Amtrak's top executive. Moorman's background as a former CEO of a Class I and Amtrak gave him a unique perspective on the case now before the STB, in which Amtrak has petitioned for its trains to run on what is mostly CSX track between New Orleans and Mobile, Alabama.

Amtrak has not offered Gulf Coast service since Hurricane Katrina damaged rail infrastructure there in 2005. Amtrak wants to offer two daily roundtrips between the cities, but CSX has said passenger service on its line would hurt freight-rail traffic in the region.

In his testimony, Moorman told the board that when he was CEO at NS, the Class I was able to reach an agreement with Amtrak, Virginia and North Carolina that resulted in a significant expansion of Amtrak service in those states.

"I felt then, and I still feel now, that these agreements were a win-win for Norfolk Southern, Amtrak and the people who live in Virginia and North Carolina," he said. "The Amtrak services have been very successful, attracting high ridership leading to additional service increases. And, very importantly, there has been significant public investment in Norfolk Southern's rail lines as a result of the Amtrak services."

Moorman got involved in Amtrak's Gulf Coast discussions in 2017, after conversations between the parties had been going on for a few years. Then Amtrak's CEO, he "made a commitment" to the Southern Rail Commission and U.S. Sen. Roger Wicker (R-Miss.) that Amtrak would support restoration of Gulf Coast service, he said.

For years, Wicker and the Southern Rail Commission have advocated for Amtrak's return to the Gulf Coast.

During Moorman's time as Amtrak CEO, CSX was seeking over $2 billion in infrastructure investments to restore service from New Orleans to Jacksonville and add a second train from New Orleans to Mobile. At the same time, CSX was claiming that it was "virtually impossible to add Amtrak service on the line because the Class I couldn't meet the 80% on-time performance standard" as required under federal legislation, said Moorman.

"I was optimistic at the time that Amtrak would be able to reach an agreement with CSX, given the experience I already had working out agreements between Amtrak and the states when I was at Norfolk Southern," he said.

Moorman said he reached out to CSX's then-CEO Hunter Harrison to discuss the details, but unfortunately Harrison died before the two could meet. By the time he left Amtrak as CEO later that year, "it seemed increasingly apparent that there wasn't going to be an agreement with CSX," Moorman said.

"And now it appears four years later, at least to me, that very little has changed," he added. "That is very unfortunate. While negotiations over these types of projects is never easy, they shouldn't take forever. If you have reasonable people on both sides, they can get done — and I have seen this happen many times."

A neutral party needs to develop a resolution, and the STB is the right entity to do that, Moorman said.

"There is a real need for passenger-rail service, particularly in the South," he said. "Our highway system is overcrowded in many areas and in an increasing state of disrepair. The appetite for good, environmentally friendly transportation alternatives is growing."

As Amtrak CEO, Moorman regularly rode the railroad's Lynchburg-to-D.C. train from his Charlottesville home to Washington, D.C. The success of that route was a driver in Virginia's recent "audacious plan" to invest $3.7 billion on improving passenger-rail service in the state, including the construction of a new Long Bridge over the Potomac River — a feature that will benefit CSX, he said.

Until the Amtrak Lynchburg service started in 2009, Virginia had little Amtrak service other than a few long distance trains, he noted.

"The one thing that I've seen in Virginia is that once states see the benefits of passenger-rail service, they can't get enough of it," Moorman said. "I expect that will also be the case on the Gulf Coast."

Moreover, the expansion of passenger-rail service in Virginia did not hurt the Port of Virginia's freight-rail service — something that he initially was concerned about while CEO of NS.

"But [NS] worked collaboratively with Amtrak on what [rail] capacity was required for the service, that capacity was installed, and initiation of Amtrak service to Norfolk in 2012 over the NS line did not have a detrimental impact on the port," he said.

Foote testified that his company is not against passenger-rail service along the Gulf Coast. CSX hopes the STB can help facilitate a partnership among the railroads, stakeholders and others so that goal can be achieved, he said.

"I am urging the board to be a voice of reason here," Foote added. "Amtrak is seeking to force its way onto our rail lines without consideration of any of the impacts it would have on our existing and future customers and local communities."

New infrastructure is needed to accommodate Amtrak's proposed service and that "should not be ignored," according to Foote.

"Instead of working together as we have successfully done in the past, Amtrak has apparently decided it would be more politically advantageous to petition [the STB] to require us to initiate service without first providing for needed infrastructure to accommodate new Gulf Coast service or to reach any agreement on the proposition," he said.

Foote suggested that Amtrak has a broader agenda than the Gulf Coast service: It wants to use the case "to create a new road map for imposing new passenger service without working with host carriers or local communities and without first adding necessary capacity."

Meanwhile, Amtrak's Gardner disputed the notion that Amtrak has not wanted to collaborate with CSX on Gulf Coast service. Discussions on the issue go back to 2015, when the federal FAST Act created the Federal Railroad Administration-led Gulf Coast Working Group to plan passenger service restoration. The working group included Amtrak, CSX and the Southern Rail Commission, but CSX did not participate "in good faith," Gardner said.

The Class I also disagreed with cost estimates for infrastructure improvements, Gardner said. While the working group estimated $100 million would be necessary, CSX put the cost at $1.1 billion.

Also, in February 2020 when Amtrak agreed to CSX's and NS's request for a capacity modeling analysis that used the rail traffic controller (RTC) model, it "quickly became apparent that the RTC modeling would serve no purpose other than to obfuscate and delay," Gardner said.

"Given the clear congressional directive to re-establish service along the Gulf Coast, and realizing that only an STB order would make that happen, Amtrak saw no choice other than to initiate this proceeding," Gardner said.

After the public comment portion of the hearing concluded yesterday, the STB held a pretrial hearing in the afternoon. The case's next phase will begin March 9 with an evidentiary hearing.