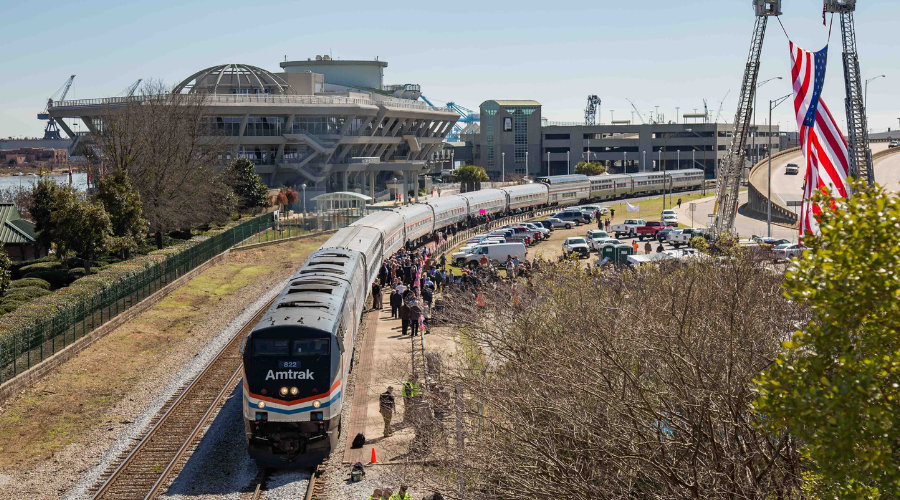 Amtrak announced yesterday it is asking the Surface Transportation Board (STB) to force CSX and Norfolk Southern Railway to allow for the operation of two daily Amtrak trains between New Orleans and Mobile, Alabama, starting in 2022.

In a press release, Amtrak officials said the national intercity passenger railroad has a legal right to use the route. The Gulf Coast line has sufficient capacity to host Amtrak trains, and up to $66 million in targeted improvements to support the new service await action, they said. The potential investments have been reviewed, approved and funded by the Federal Railroad Administration (FRA) and others, according to Amtrak.

Under STB procedures, CSX and NS will be required to provide Amtrak access to their railroads for passenger-rail service, or prove to the public why they cannot host Amtrak trains, Amtrak officials said.

In the STB filing, Amtrak asks for expedited consideration and an order allowing the roundtrips, which would operate for the Southern Rail Commission (SRC), a federally created entity representing Alabama, Louisiana and Mississippi.

The FRA, Amtrak, CSX, NS, SRC and others began efforts to return service to the coast in 2015. An FRA Gulf Coast Working Group plan in 2017 laid out the steps necessary to begin Amtrak service on the route and laying out potential improvements. Many of of those improvements have been funded since 2019, Amtrak officials said.

"Amtrak has a right to use these railroads' tracks but, unfortunately, we have been unable to reach agreement after years of effort just to operate two short and quick roundtrip Amtrak trains," said Dennis Newman, Amtrak executive vice president for planning and asset development.

It's time for the STB to step in and protect Amtrak's right to use freight railroad track to support its service across the United States, Newman added.

The SRC issued a statement in support of restoring passenger-rail service to the region.

"Our local communities are frustrated by all the years of studying and waiting, and we are hoping this public transparent process will resolve all outstanding issues so that service can begin soon," said Mississippi SRC Commissioner Knox Ross.

CSX issued the following statement on Amtrak's STB filing: "Amtrak elected to abandon the long-standing practice of completing an impact study when the introduction of new passenger service is proposed. Now that this matter is before the Surface Transportation Board, CSX has no further comment."

NS officials declined to comment on Amtrak's action before the STB. An NS spokesman reiterated the company's previously issued statement on the matter of restoring Gulf Coast passenger-rail service: "There is an established process for introducing new passenger-rail service on freight-rail lines recognized by both the freight and passenger railroad industries. It involves identifying, through a data-driven study, what infrastructure is necessary to ensure that the new passenger service is transparent to freight operations and doesn't negatively impact the freight-rail customers. The public entities sponsoring the service finance the infrastructure construction prior [to] passenger service being introduced. It is a well-instituted process, one that history has shown to work. Norfolk Southern welcomes the prospect that this process will be revived and completed in the proposed Mobile-New Orleans service."