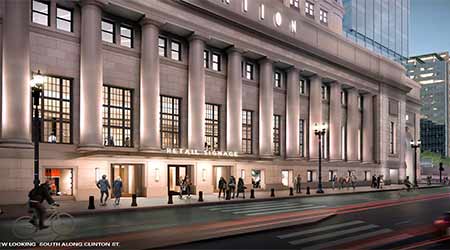 Amtrak, Union Station Redevelopment Partners and Chicago city officials on Sunday announced the next phase of improvements that will be made at Chicago Union Station.

The work will include the addition of a new entrance on Clinton Street that will open the west side of the Amtrak-owned station’s Headhouse for development as a food court and retail space.

The announcement comes as the Chicago City Council is scheduled to vote tomorrow on Riverside Development's proposal to build a 50-story office building and 1.5-acre park on Amtrak land south of the station.

The Riverside development is estimated to be worth $900 million and is expected to create 5,100 construction jobs and 480 permanent jobs, according to a press release issued by Chicago Mayor Rahm Emanuel's office.

Construction is expected to begin in fourth-quarter 2019. The project also includes renovation of the fourth-through-eighth floors of the Headhouse and a ninth-story addition for two hotels.

"Amtrak has taken a major step in unlocking the value of our real estate in Chicago by reaching agreement with a group led by Riverside Development for an office tower on the block south of Union Station," Amtrak officials said in a prepared statement. "The new building will connect to Union Station and the CTA's Union Station Transit Center and include public green space, replacing a parking structure that is nearing the end of its useful life on the block bordered by Jackson Boulevard, Clinton, Canal and Van Buren streets."

Upon receipt of the proceeds, Amtrak will use some of the funds to "activate" remaining undeveloped spaces in the station's Great Hall for restaurants and other services, including the new entrance to the Headhouse building on the station's west side from Clinton Street, Amtrak officials said.

"This will will dramatically improve ADA access and allow the station to meet the needs of the fast growing business and residential areas in the West Loop," they added.

Amtrak has invested more than $60 million of capital funds in the station since 2010, including the Headhouse Building, Great Hall and the concourse level.