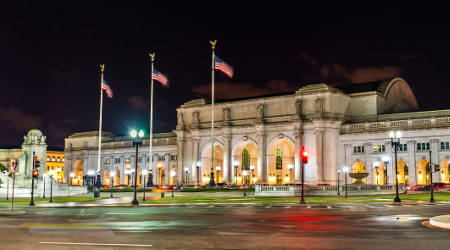 Amtrak's improvement projects at Washington Union Station face risks of delays and cost overruns due to weaknesses in scheduling, cost estimates and project management, according to a new report by the Amtrak Office of Inspector General (OIG).

Amtrak agrees with all the OIG's recommendations for the station projects, an Amtrak spokeswoman said in an email.

Amtrak's second busiest station, Washington Union Station has been undergoing 10 near-term projects to address platform design and safety standards and other operational inefficiencies that limit the capacity and circulation of passengers, according to the report.

The projects, which Amtrak estimates will cost about $296 million, are intended to modernize the station's concourse, rehabilitate the sub-basement and improve the rail terminal.

One project has been completed, with nine remaining. The OIG assessed the status of those projects and found challenges in completing them on time and budget. The "weaknesses" in its practices for scheduling, cost estimating and project management exist because Amtrak did not fully implement its Enterprise Program Management Office standards and other project management standards.

Because most projects are just entering the construction phase, Amtrak has time to address the problems by completing and integrating schedules, updating cost estimates, approving necessary project charters and implementing risk-mitigation plans, the OIG concluded.

"Amtrak is already taking steps to improve the oversight that will ensure timely, on budget delivery of these projects," said Amtrak spokeswoman Kimberly Woods. "Amtrak's project management standards will improve schedules and cost estimates and allow us to develop risk mitigation plans for each of the projects."

About 5.2 million passengers use the station annually. The station is operating at capacity and peak passenger use is expected to triple over the next 20 years. In 2012, Amtrak released a master plan to address near-term projects and long-term initiatives to expand and improve the station.