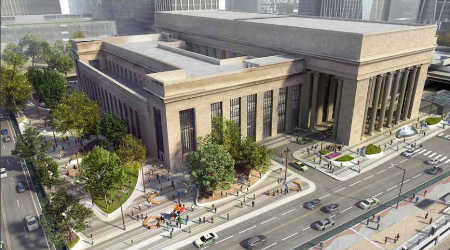 The 107-page proposal was developed in conjunction with FXFOWLE, !melk, JMT and Arup.

"Increased rail traffic in the coming years for Amtrak and SEPTA will necessitate the redesign and upgrading of rail operations at 30th Street Station, while bus activity is also predicted to increase," states the proposal's executive summary. "This growth in transit use will result in a surge of pedestrian activity. The concept plan ensures that the 30th Street Station Plaza develops to meet current needs and accounts for the planned future growth of the neighborhood and anticipated increases in train ridership."

The plan identifies the critical functions and primary uses of the plaza, as well as planning principles to establish design guidelines.

The concept plan can be read here.