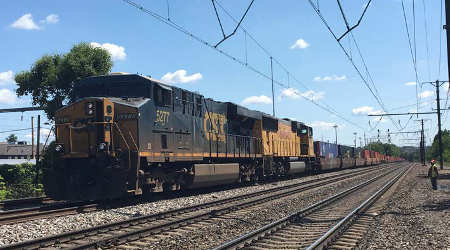 The National Transportation Safety Board (NTSB) on Tuesday released a preliminary report on the June 27 incident in which an Amtrak train struck and killed two CSX workers in the Ivy City neighborhood in Washington, D.C.

The two employees — a conductor and conductor trainee — were returning to their locomotive on their southbound train after inspecting a reported defective rail car. They had their backs toward the approaching Amtrak train when they were struck, NTSB officials said in the report.

The situation unfolded after a CSX train dispatcher told the train’s crew that a wayside defect detector had identified overheated bearings or wheels. The detector also recorded a suspect axle.

The conductor and conductor trainee then went back to inspect the car with the suspect axle. After inspecting a second car reported by the mechanical department, the two workers started walking back to the locomotive, which was positioned adjacent to Amtrak's track.

As they approached the front of their locomotive, the walking space between the CSX and Amtrak tracks narrowed. The CSX workers then were struck by an Amtrak train traveling about 73 mph.

The investigation into the incident is ongoing. NTSB will supplement or correct the information in the preliminary report as the investigation continues, board officials said.