The preliminary report indicated that at the time of the accident, the two workers were performing maintenance on main track 2 at the accident site over a planned 55-hour period from April 1 at 10 p.m. to 5 a.m. on April 4. The work included ballast cleaning and remediating fouled ballast on main track 2, according to the report. 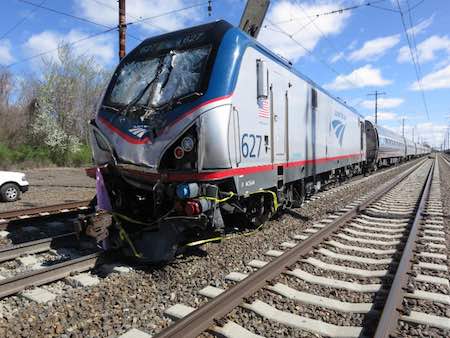 Damage to Amtrak's train 89 after the derailment near Chester, Pa.
Photo: National Transportation Safety Board

During the maintenance window, main track 2 was removed from service and intermittent foul time — which sets work limits that indicate no trains will operate within a segment of track until the roadway worker reports clear of the track — was granted on tracks 1, 3 and 4 to protect a backhoe the workers were using.

"NTSB investigators are confirming what roadway worker protections were in place at the time of the accident," the report stated.

The accident occurred at 7:50 a.m. when Amtrak train 89 — operating on main track 3 — struck the backhoe, killing the backhoe operator and his supervisor. The train had seven crew members and 337 passengers on board. Forty-one people were taken to local hospitals.

The locomotive engineer told NTSB investigators that just before the accident, he applied emergency brakes after "seeing something" on main track 3.

In addition to the NTSB, the Federal Railroad Administration, Brotherhood of Locomotive Engineers and Trainmen, International Association of Sheet Metal, Air, Rail and Transportation Workers, the Brotherhood of Maintenance of Way Employes Division (BMWED), and the American Railway and Airway Supervisors Association are investigating.