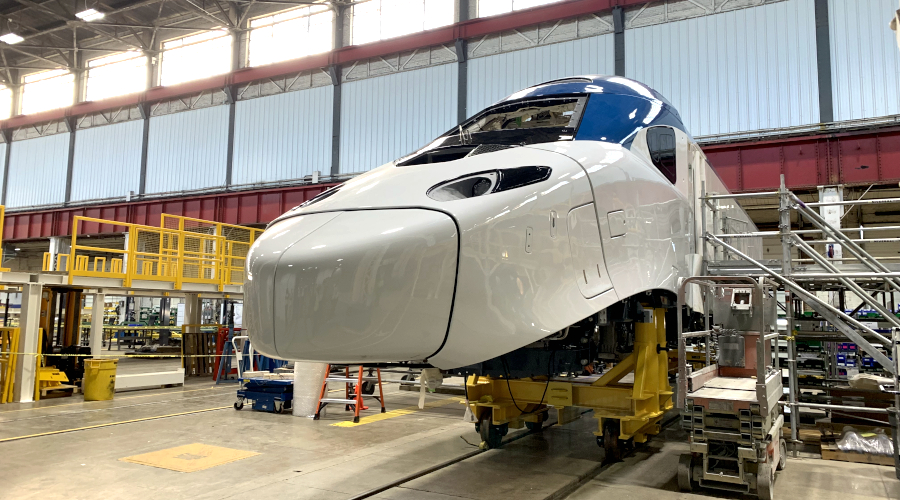 Amtrak is on track to introduce new high-speed trains for revenue service on the Northeast Corridor (NEC) from Washington, D.C., to Boston as early as 2021.

While it’ll be marketed under the same name as the fleet it’s meant to be replacing, the next-generation Acela is far from a refresh, Amtrak and Alstom officials said during a press tour held on June 12 at the Alstom manufacturing facility producing the fleet in Hornell, New York.

Amtrak’s next-gen high-speed Acela trains will enter into service on the Northeast Corridor in 2021. Here’s a inside look from the Alstom facility manufacturing them in Hornell, New York. pic.twitter.com/nm14C7eV5E

The trains are being completely redesigned with improved passenger amenities, and engineered with an active-tilt technology that enables the trains to drive into turns, allowing them to reach higher speeds.

Called the Tiltronix, the active-tilting system was developed by Alstom Transport Technologies and is designed to control the angle of tilt on the track and require less movement in the coupling device, said Alstom’s Acela Project Director Didier Cuadrado.

The trains are designed to handle 186 mph with the tilt function enabled; however, due to existing NEC rail infrastructure, the trains will only travel up to 160 mph on some straightways, Amtrak officials said. Still, that’s 10 mph faster than the trains it’s built to replace.

“We’re going to get everything we can out of these trains as far as top speeds,” NEC Vice President Caroline Decker said during the press tour.

Amtrak ordered the 28 Acela trainsets, also known as Alstom’s Aveila Liberty, in 2016 after receiving a $2.5 billion federal loan under the Federal Railroad Administration’s (FRA) Railroad Rehabilitation and Improvement Financing program, according to a press release. To produce them, Alstom built a static testing facility big enough to house a trainset, extended its outdoor testing tracks and installed updated catenary. Alstom will test the trains in the facility this summer.

By December, the trainset prototypes will be shipped from Hornell to the Transportation Technology Center in Pueblo, Colorado, for additional and final testing in early 2020.

From preparing low voltage wiring to overseeing the assembly of the power cars, the Alstom crew is on track to have the trains shipped and ready for testing by the end of the year. pic.twitter.com/0XIBWsehkO

Following approvals from Alstom, Amtrak and the FRA, the trains would enter into revenue service on the NEC in 2021.

The 378-seat cars will include improved passenger amenities including larger windows, a redesigned cafe car with loading doors to accommodate food service staff, and onboard information systems that will provide real-time information such as location, train speed and conductor announcements, Amtrak officials said. All trains also will feature larger restrooms with a 60-inch diameter turning radius to accommodate passengers who use a mobility device; and a cover over the gangway connection to create an even surface so all passengers can move more easily between train cars.

Each seat will also include an outlet, USB port, adjustable reading lights and an overhead luggage compartment.

Furthermore, the Acela trainsets were built to be what Decker called “future proof.” The cars’ interior fittings and design can be reconfigured to accommodate more or less seating, and the train can be expanded from nine cars up to 12 without modification to the traction system, according to Alstom’s website.

Until full integration of the new trainsets by 2022, Amtrak will operate a mixed fleet of the original and next-gen Acela on the corridor, Decker said during the press tour.

In the meantime, Amtrak has made an effort to refresh the interiors of its 20-trainset Acela fleet by replacing seat cushions and covers, installing new carpet runners along the aisles and deep cleaning each of the 100 cars, according to a press release.