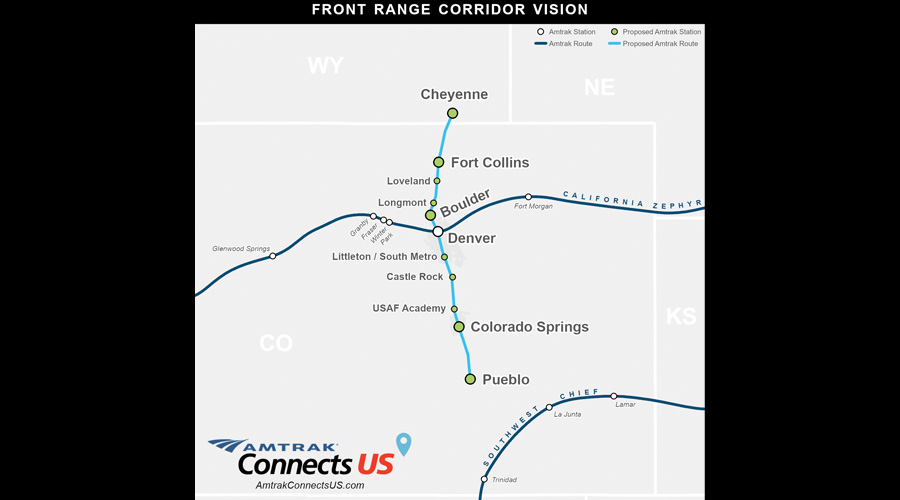 Amtrak executives and business and political leaders from Colorado and Wyoming last month discussed the potential for a new passenger-rail route along a 200-mile corridor between Pueblo, Colorado, and Cheyenne, Wyoming.

The proposed Front Range Corridor Passenger Rail System would offer three daily round trips from Fort Collins to Denver to Pueblo, with one daily round trip extending to Cheyenne. Amtrak would provide the service under a partnership involving the two states and host railroads BNSF Railway Co. and Union Pacific Railroad.

Proposed stations in Colorado would be located at Pueblo, Colorado Springs, the U.S. Air Force Academy, Castle Rock, Littleton, Denver, Boulder, Longmont, Loveland and Fort Collins. One station would be established in Cheyenne.

The Front Range Corridor is one example of the up to 160 communities in over 25 states that Amtrak envisions being able to serve over the next 15 years under its proposed expansion dubbed “Connect US.” Unveiled last month shortly after President Joe Biden announced his $2.3 trillion jobs and infrastructure proposal that includes $80 billion for rail, Amtrak’s plan calls for construction of new and expansion of existing services to 47 out of the top 50 metropolitan areas.

During an April 12 roundtable discussion, Amtrak President Stephen Gardner and Chief Executive Officer Bill Flynn talked about the potential service with two members of the Front Range Rail Commission — Jill Gaebler, a Colorado Springs council member, and Sal Pace, the commission’s vice chair — and Dale Steenbergen, president and CEO of the Greater Cheyenne Chamber of Commerce. For the past four years, the commission has been working on a passenger-rail plan that would address population and economic growth; alleviate traffic congestion along Interstate-25, the existing thoroughfare connecting northern and southern Colorado; and reduce carbon emissions.

The Front Range region — where 85% of Colorado’s population resides — needs an alternative transportation mode to driving along I-25, Gaebler said. A Front Range/Amtrak route would offer that alternative and contribute to economic expansion. It also would help serve the transportation needs of the U.S. military, which has five bases in the Colorado Springs area.

The proposed rail system would support and encourage more economic growth between the two states, Steenbergen added. About 1,100 military men and women from Cheyenne regularly travel up and down the corridor, and another 5,000 residents interact with Colorado businesses daily.

Amtrak’s Gardner noted there’s a new momentum for passenger-rail service in the Front Range and other regions across the nation, especially in those areas that have experienced population growth over the past 50 years since Amtrak’s founding. The railroad’s executives will be working with Congress and the Biden administration to secure the funding necessary to invest in passenger-rail infrastructure and equipment going forward, Gardner and Flynn told the panel.

The U.S. population has grown by 120 million people since Amtrak began operations in May 1971, “yet our service map today is essentially the same,” Gardner said.